The Sea Returns to Ephesus 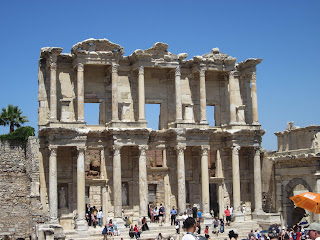 During my trip to Turkey in June I was given the change to visit the ancient city of Ephesus.
As a coastal city, Ephesus was an intersection for commerce and Roman administration. One constant problem, however, was that the city’s geography was subtly, and slowly changing. The river Cayster flowed into the harbor and with its unstoppable flow came a steady supply of debris carried from hundreds of miles away and deposited into the waiting harbor. The harbor was constantly in danger of being filled with silt. In spite of attempts to dredge the silt away, there were many who feared that the harbor would eventually move further away and leave the ships and docks of Ephesus pitched up on dry land.

Such a prospect was not impossible. Almost three hundred years before, the people of Ephesus had moved their city from its old location. The marshes created by the silt from the river Cayster were the cause of malaria and many deaths among the inhabitants. According to Strabo, they were eventually forced to move to the city’s present location when the king flooded the old city by blocking the sewers (Strabo, Geography volume 1-7; 14.1.24). Eventually the river won out. That combined with a series of devastating earthquakes forced the people to abandon the city.

But Ephesus is about to be reconnected with the sea once again. A project started by Turkish Tourism plans to dig a canal from the sea to the old harbor of Ephesus. Tourists from, especially those from cruise ships, will be able to take a boat to Ephesus and enter it the way people did 2000 years ago when Paul was still there. Here is a bit of what the press release has to say.

Noting that the project was launched in 2012, the official said: “We are conducting the works within the scope of a common project and under the direction of the Transportation, Maritime Affairs and Communications Ministry. The transportation from Ephesus Harbor to the Pamucak Coast [on the Aegean] will be possible with boats. Our aim is to revive history again. Recreation areas will be established with proper landscaping. We want to make the ancient city of Ephesus more attractive to tourists. The visitors will have a chance to live the experiences and ambiance of the old times.”

Ediz, however, said it was not currently possible to give any indication as to when the project would be completed. Although Culture and Tourism Minister Ertuğrul Günay recently announced that tourist numbers to Turkey as a whole through the first seven months of the year had declined close to 2 million on the back of regional tensions in Syria and Israel, visitor numbers to Ephesus continue to increase.

You can read the whole article here.
Posted by John Byron at 8:52 AM