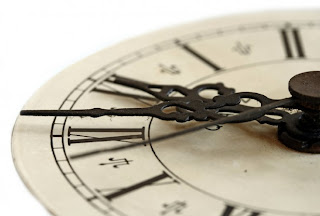 Today in my ongoing Thessalonians series I look at 1:9-10.

9 for they themselves report what kind of reception you gave us. They tell how you turned to God from idols to serve the living and true God, 10 and to wait for his Son from heaven, whom he raised from the dead—Jesus, who rescues us from the coming wrath.

In the closing lines of this chapter Paul addresses a group of people waiting for Jesus to return. They had turned from their old gods and idols to follow the true God and his resurrected Son Jesus who would return one day. During his time with them Paul told the Thessalonians about what will happen “when” Jesus returns, but they are waiting for the “when” to become “now.” This the first time he brings this up in the letter and he does so by way of praising them. But as we will see later in 4:13-5:11, they are beginning to wonder a bit more about at what point the “when” will become “now.”

For Paul and the Thessalonians the time of Jesus’ return was imminent. In 1 Corinthians 7:29 Paul says that “the time is short.” But for those of us living 21 centuries later the time has become “very long.” The return of Jesus has not happened and it is difficult to live with a feeling of imminence. It is hard to juggle the responsibilities of life and live with the belief that Jesus could return at any moment. Many of us probably think more about when and how we will die than when Jesus might return.

While growing up I was exposed to teachers and preachers who often proclaimed that Jesus “could return at any minute.” This was presented as good news, but it was also confusing since for those of us in adolescence were also looking forward to growing up, marrying and starting families of our own. I remember one night at dinner my father suggesting that the Lord would probably return before my sister and I were through being teenagers. At that point my sister burst into tears and said “But I want to get married.” That cry of a young adolescent crystallizes the tension we can all feel while waiting for the imminent return of Jesus. We know that our hope should ultimately be focused on the day of Jesus’ final victory, but we also have a life to live in the mean time and need to invest ourselves in it.

But perhaps we should not think so much along the lines of “imminence,” but “anticipation.” I suppose this is a low-key “imminence,” but it does recognize the tension we all feel of needing to live life with the belief that Jesus could return in any generation. We are waiting, and God is not on our time schedule. Waiting means that it is out of our hands. And waiting is how we recognize the sovereignty of God to have the final say. God works it in God’s time.

There is a scene in C. S. Lewis’ The Voyage of the Dawn Treader that helps illustrate. Aslan, the Christ figure in the book, has just appeared to Lucy in the magician’s attic. But almost as soon as he has appeared, Aslan leaves with these words.

“Do not look so sad. We shall meet soon again."
"Please Aslan," said Lucy, "what do you call soon?"
"I call all times soon," said Aslan; and instantly he was vanished away and Lucy was alone with the Magician.

Lucy’s question reflects that desire to know at what point “when” will become “now.” But Lewis reminds us that when we are “waiting” time is not an issue, at least for God. Neither God nor Aslan is bound by time and for both all times and events are immediate and present. But for Lucy and the rest of us, we are left waiting and anticipating for that day and yet living our lives as if we will be here till we die.

Living and waiting in anticipation also recognizes the church’s location within redemption history. We, as the church, are situated between the resurrection of Christ and the revealing of Christ. By its very existence the church is a witness to God’s redemptive work in history. And this is the church’s time for mission, to share the good news of what God has done in Christ. Although we are waiting for Jesus to rescue us from the coming wrath, we are also positioned to share God’s love with the world. As we will see later in this letter, evangelization is linked to the victory in the final arrival of Jesus Christ. Evangelization in the present time takes on eschatological significance. Jürgen Moltmann puts it this way in his Theology of Hope.

The risen Christ calls, sends, justifies and sanctifies men, and in so doing gathers, calls and send them into his eschatological future for the world. The risen Lord is always the Lord expected by the Church – the Lord, moreover, expected by the Church for the world and not merely for itself. Hence the Christian community does not live from itself for itself, but from the sovereignty of the risen Lord and for the coming sovereignty of him who has conquered death and is bringing life, righteousness and the kingdom of God (p.325).

Moltmann hits it on the head. The church of Jesus Christ, like Israel, is not saved for itself. It is saved to be part of the mission of God to the world. Therefore, we should ask ourselves how our lives should be different because of the hope we have that Jesus will one day return.

It’s easy for the church to become insular and detached from the rest of the world as we wait for Jesus to return. But Christians are Christ’s representatives to the world. We have an obligation to not just live out the gospel in expectation of Jesus’ return; we also need to share it. The church cannot ignore the social ills and concerns of the world. This means not seeing the return of Jesus as an escape plan, but rather a close, but fuzzy timeline for the work of the gospel. True there is no clear end in sight. We don’t know at what point in time the “when” will finally become “now.” But as we wait for the return of Jesus we need to be Jesus to the world around us.
Posted by John Byron at 8:53 AM