Posted by John Byron at 3:37 PM No comments:

Today is Epiphany. Let's Celebrate with a Film 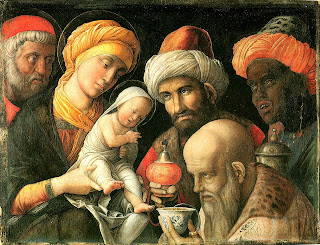 January 6th is the day that western churches designate as Epiphany, This date celebrates two things: The manifestation of Christ and the visit of the magi to the Christ child. Most will celebrate this Sunday.

Perhaps by coincidence, over at the NT Blog Mark Goodacre has announced that the 1912 movie The Star of Bethlehem is now available online. This is a 15 minute version of what was at one time a much longer film. It is of course a silent film with background music. But considering how new the technology and art of film making was in 1912, it is done quite well.

I teach a class on Jesus and film and enjoy watching the various interpretations of the Jesus story. There are a number of early Jesus films that were produced in the early 20th century, but they are often hard to get a hold of. Thanks to the wonder of the internet, many of them are now becoming more widely available. Thanks Marks!

Health Evangelism: Yet another way NOT to use the Bible.

This has been on the web the last few days and I studiously avoided posting anything about it. But being early in the new year things are slow at the biblical world. And besides, this kind of application of the Bible is just plain annoying.

Jerry Anderson is a "health evangelist" and fitness guru. I have never heard of a health evangelist before, but I suppose it is the result of misapplying scripture combined with a zeal for healthy living. I don't object to healthy reading and I certainly don't object to studying the Bible. But I am not convinced that the Bible provides much in the way of health advice, except for the admonition to "take a little wine for your stomach" (1 Tim 5:23). In many ways this is the kind of biblicism that Christian Smith was reacting against in his book The Bible Made Impossible (see my review here).

I will refrain from commenting further and leave it to my readers to provide the expert analysis.

The End of the World? Again?

Last year the media was abuzz with Harold Camping's prediction that May 21, 2011 was when the rapture would happen and the world would begin to come to an end. As my readers know, I didn't buy it for numerous reasons the first of which being that I don't believe in a rapture (see my previous post for why I am not worried about May 21).

Camping has since retired after making at least a third incorrect prediction (he later switched the date to October), Luckily there was a worthy replacement waiting in the wings. The Mayan Calendar, it is claimed, stops in December 2012, which some interpret as the date the world will end. Once again I am not buying it.

It seems that there is a new "end of the world" prediction every couple of years.  The turn of the millennium fueled the fires of paranoia as people feared the Y2K melt down, that also never happened.

One favorite past time of some is to pair current events with Bible prophecies, the book of Revelation in particular. Some approach Revelation as the key to it all. I have suggested before that Revelation is not a road map to the future. Over at the Huffington Post Greg Carey, Professor of New Testament at Lancaster Theological Seminary, lays out some reasons why New Testament scholars think this way. Here is a bit of what Carey says:

Here's the truth: no academic interpreter of Revelation understands the book as a roadmap for the future, much less as telling contemporary Christians that these are the last days. Instead, scholars understand that Revelation originally spoke to the conditions of its own time and place. It offered a specific group of first century Christians not only hope for the future but also an interpretation -- a "revelation" -- of the world they inhabited. In other words, the best way to understand Revelation does not require an official Dick Tracy Apocalyptic Decoder Ring. We best understand Revelation when we read it like any other ancient text, in its own historical and cultural context.

What makes biblical scholars so certain that Revelation does not provide a roadmap for the future? Two basic considerations lead us to this conclusion.

First, the book itself insists that it's addressed to a specific group of churches to speak to their own circumstances. Second, we know a lot about the kind of literature Revelation represents. Revelation is an apocalypse, a form of literature with which biblical scholars have grown quite familiar.


I agree with much of what Carey has to say (you can read his whole article here). My only quibble with him is his claim that "no academic interpreter of Revelation understands the book as a roadmap for the future". Either Carey doesn't get out much or he has a more narrow view of who is an "academic interpreter." And some readers of this blog would take strong exception to him suggesting that they are not academic interpreters. Otherwise, it is a good article that gives a perspective on how Revelation is interpreted in its historical and literary setting.

In the mean time, if you are still unsure about the Mayan Calendar, here is a cartoon that gives, I think, a better interpretation 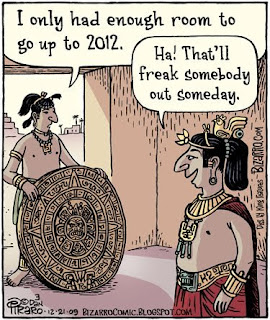 Email ThisBlogThis!Share to TwitterShare to FacebookShare to Pinterest
Labels: End of the World

Beer - The Other Savior of Civilization 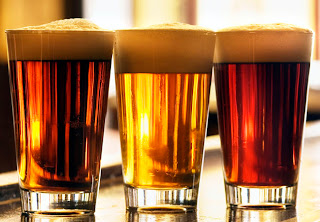 As some of you may know, when I am not reading in Greek and Hebrew or writing on some topic related to biblical studies, I like to make beer. I have been a home-brewer for about seven years and even teach an "Introduction to Brewing" class. Much to the chagrin of my students, it is not a course I offer at the seminary.

I know there is quite a controversy among some Christians as to whether or not one should drink. Obviously, I have made my choice as to which side I land. But there are some who are still deciding. While I am not looking to convert anyone to drink beer or wine (another hobby I have dabbled in), that is a personal choice, I thought my readers might enjoy some of the information that has been in the blogosphere recently.

Over at Theology for Real Life, Preston Sprinkle has been doing a series on the topic of alcohol. His posts are titled Wine, Beer, Cabernet Sauvignon, O'doul's and Belgium Trippel Ale. I think you will find his discussion quite stimulating.

If, after reading Preston's posts, you still are not sure about the value of beer to our civilization, then I suggest you watch the below video. It details how beer saved the world. It is obviously full of tongue and cheek, but it is also full of real history.

Rumors have been flying around the internet about the discovery of 150 fragments. The site may have been a synagogue Geniza where disused scrolls were placed. If the find is authenticated, it would be the biggest such discovery since the Cairo Geniza. See my post on the Cairo Geniza.

So far little information is available but the Jerusalem Post had this to say over the weekend.


The scrolls, which were part of a geniza – a burial site for sacred Jewish texts – date from around 1,000 years ago and are in Arabic, Judeo-Arabic and ancient Persian.

One scroll, a replica of which was shown to the cameras, was apparently a dirge written for an important person whose identity has not been determined.

“Where has he gone?” reads the text. “His family members are now alone.”
Other texts said to have been found include an unknown history of the Kingdom of Judea, passages from the Book of Isaiah and some of the works of 10th-century sage Rabbi Sa’adia Gaon.

In addition, rings with names such as Shmuel Bar-Yosef inscribed in Hebrew on them have surfaced.

The area in which the scrolls were discovered is on the Silk Road, a trade route that connected eastern Asia with the Middle East and Europe, and that Jewish merchants often traveled.
Ya’ari quoted sources as saying the scrolls had first been moved to Pakistan’s Peshawar province, and from there been sold to antiquities dealers in Geneva, London, Dubai and Jerusalem.

I will add more as the information becomes available. Hopefully it is not another fraud as was the case with the Lead Codices last year.
Posted by John Byron at 12:00 AM No comments: