The Passing of Walter Wink

Mark Goodacre and Brice Jones are reporting that Walter Wink has died. Wink is well-known from his numerous books and his integration of social justice topics with biblical studies. I found the following biographical piece about him on Amazon.


Walter Wink (born May 21, 1935) is a professor emeritus at Auburn Theological Seminary in New York City. His faculty discipline is Biblical interpretation. Wink earned his 1959 Master of Divinity and his 1963 Ph.D. from Union Theological Seminary in New York City. Ordained a Methodist minister in 1961, he served as Pastor of First United Methodist Church, in Hitchcock, Texas from 1962–67. He then returned to Union Seminary as first Assistant, then Associate Professor of New Testament. In 1989–1990, he was a Peace Fellow at the United States Institute of Peace. He is known for his work on power structures, with a progressive Christianity view on current political and cultural matters. He coined the phrase "the myth of redemptive violence", and has contributed to discourse on homosexuality and religion, pacifism, psychology and Biblical Studies, and Jesus as a historical figure.

You can find a selection of wink's books at WalterWink.com.
Posted by John Byron at 9:17 PM 3 comments:

I ran across this cartoon on two of the blogs I follow. I decided not to provide any commentary and to allow the readers respond and tell me what sort of thoughts/responses this comic elicits. 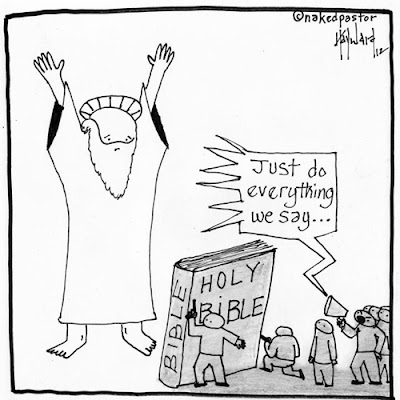 A Fragment of Mark's Gospel

No, this is not the so-called first century fragment of Mark about which rumors have been flying around the internet. That fragment has still yet to be published.

This is a third/fourth century papyrus from Oxyrhynchus Papyri collection at Oxford. This fragment was published recently after being examined by experts, which is what we all hope will happen with the so-called first century fragment of Mark to determine if it is authentic AND from the first century.

The fragment below contains the opening lines of Mark's gospel. For those who can read Greek, it contains the first two verses of Mark 1, which includes the quote from Malachi 3:1. You will also note the abbreviated spellings of 'Jesus' and 'Christ' since these are treated as nomina sacra in the text.

What makes this fragment interesting is that 1:1 does not include the phrase"son of God." As most first year Greek and New Testament students learn, there is some discrepancy among the witnesses to Mark as to whether "Son of God" was original or not. This fragment is a witness to its absence in some manuscripts.

I have included a photo below from the Oxyrhynchus Papyri webpage. If you go to the the webpage, however, you can look at low and high resolution photos and increase the size.

You may know Wyndy from her book Reviving Evangelical Ethics (Baker, 2008). She has started blogging over on Patheos with Daniel Harrell, Kyle Roberts and Daniel A. Siedell. The blog which looks at the relationship between theology, art and culture is called Cultivare

Wyndy wrote a short piece yesterday on "Seeing" as she reflects on a recent trip to the Cleveland Museum of Art to see a Rembrandt exhibit. Do stop by and let them know what you think.
Posted by John Byron at 2:00 PM No comments:

The Passion of the Christ, in Prison

I found this in today's New York Times. It is a about a group of prisoners in the Louisiana state prison and the passion play they are producing.

Leaving and Returning to Chruch 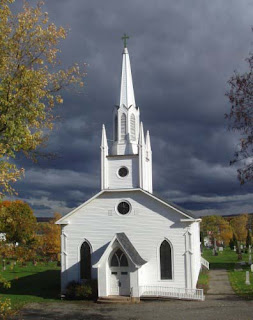 I ran across an article on the CNN Religion blog by one such person. She describes her experience and reasons for leaving the church and then returning. Two things struck me about what she said she learned through her experience.

First, her doubt belonged in the church.

Second, her doubt is part of her faith.

That is not the kind of message you normally hear, but it resonates with me and I suspect others. Read her article here. I think you will find an interesting perspective.