The Biblical World is on Temporary Relocation

I am in Turkey for the next two weeks visiting the various sites. I hope to post some pictures as well as thoughts as I travel. My posts might be a bit more infrequent than usual.

In the mean time, here is the Hagia Sophia from our hotel. 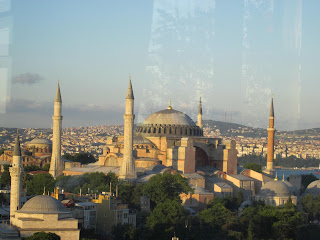 Earlier this week I posted about the ongoing controversy surrounding the so-called James ossuary that Hershel Shanks and Biblical Archaeology Review declared "authentic"! Whew, I was worried for a moment.

This morning I was greeted with a message from a friend with a link to an MSNBC article declaring that the bones of John the Baptist "may" have been found. Apparently a stone sarcophagus in a Romanian church was discovered to have six human bone fragments and three animal bone fragments. As you can see the evidence is already tantalizing and suggests that they could be that of John the Baptist, or they are the first real proof that John the Baptist was a centaur.

But the real "nail in the coffin," so to speak was this:

The next day, the researchers found a second box just 20 inches away. This one was made of volcanic rock called tuff. On it, an inscription read, "Dear Lord, please help your servant Thomas" along with St. John the Baptist's name and official church feast day.


Really riveting stuff! After all, January 24th is the feast of John the Baptist and with that date and a handful of bone fragments what else would you conclude? I mean just because we don't know when he was born, where he was buried and the feast date was created by the church is no reason to doubt this find. And of course the evidence keeps piling up now that everything has been subjected to thorough, scientific examination.

The human bones in the box included a knucklebone, a tooth, part of a cranium, a rib and an ulna, or arm bone. The researchers could only date the knucklebone, because radiocarbon dating relies on organic material, and only that bone had enough collagen for a good analysis. The researchers were able to reconstruct DNA sequences from three of the bones, however, showing them to be from the same person, likely a Middle Eastern man.


The article doesn't mention if they found his head nearby. Oh, well. If is wasn't for stories like this I would not have fodder for this blog.

Happy Friday!
Posted by John Byron at 9:27 AM 6 comments:

The July/August edition of Biblical Archaeology Review  (BAR) will carry an article in which Hershel Shanks declares that the inscription on the "James Ossuary" is authentic.


You may remember that the James ossuary has been the center of controversy for sometime. It first came to the attention of the media and scholars alike in 2002. It caused a sensation around the world because it bears an Aramaic inscription which reads James son of Joseph brother of Jesus. The story was picked up by major news outlets with the claim that the ossuary belonging to Jesus' martyred brother James had been discovered. Soon after BAR arranged to have the ossuary shipped to Toronto to be put on display during the annual meeting of the Society of Biblical Literature. Tragically, the ossuary was cracked in transit and had to be repaired.


It wasn't long before numerous questions about the ossuary began to surface. While no one doubts that the ossuary itself is authentic, there are many who question the inscription or at least part of it. Some have suggested the whole inscription is a fake others that the portion which reads "brother of Jesus" is a fake. Whether or not that is the case one must admit that the temptation to forge such an inscription is great for those who are looking to profit off  the discovery of biblical artifacts.


A related problem is that the ossuary was purchased in an antiquities shop in the Old City of Jerusalem. This means that while the ossuary is authentic, it is only interesting from the stand point of being yet another inscribed ossuary. Without the ability to survey and study the tomb in which it was found we cannot determine very much about it. It is like discovering a line written by Shakespeare without any context. We don't know if it is from a letter he wrote, an unpublished play or a grocery list written by Ann Hathaway. All we can truly say about the James ossuary is that it fits the evidence for first century, Jewish burial practices and that the inscription also fits the time period.


Eventually the owner of the ossuary, Oded Golan, was accused of forging the inscription and put on trial with others. After seven years of legal wrangling the judge in the trial declared Golan's acquittal since he determined that the prosecution did not prove their case against Golan. Please note, this does not mean that the inscription was declared to be authentic or that it refers to the same James of the New Testament known as Jesus' brother. It simply means that there was not enough conclusive evidence to convict Golan. All of the same questions, doubts and debates surround the ossaury.


Now Shanks is declaring victory. He has written a six page article under the headline  "Brother of Jesus Inscription is Authentic!"  I read the article seeking for a new piece of evidence that perhaps had come to light that would perhaps tip the debate in favor of the inscription's authenticity. I found nothing. In reality, most of the article is a rehash of the same story we have been reading for ten years now. Even Shanks admits in the beginning of the article that the judge did not rule the inscription authentic and he also admits that it is impossible to prove that it belonged to the brother of the Jesus of Nazareth.


But Shanks has a magazine to sell, one to which I admit I have a subscription, so he closes it with some statistical information related to first century, Jewish, male, names in Jerusalem. In the end this how Shanks ends the article.

So does Shanks think this ossuary belongs to Jesus' brother? Well he is not saying, but he certainly wants his readers to keep buying magazines and I can't fault him for that. But some will now declare the significance of only an 18% chance that 3 individuals had this combination of names. For them this will be hard, archaeological evidence that Jesus existed. Perhaps. But whether it is 18%, 8% or even 1% there are other problems with this ossuary some of which I listed above. And buying an artifact in an antiquities shop is not archaeology. It is a form of looting.


In the end there are way to many variables in human history. One must be careful when using scientific theory to interpret history. It is helpful, but it can also be unreliable. History is not a controlled experiment in which we can observe everything that is happening and draw conclusions. We can only observe what happened with what meager evidence we have and then draw a very tentative conclusion. The fact is humans are wildly unpredictable and there are any number of possible variables that could distort our interpretation of history. There is too much that we simply don't know.


From a faith point of view, I am not bothered whether this inscription is authentic or not. From a historians perspective, I wish it had been handled better.
Posted by John Byron at 10:39 AM 3 comments: 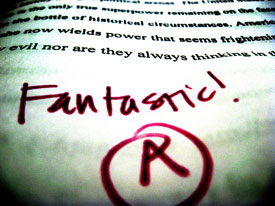 
Allan Bevere has some good thoughts today on the topic.


Grade Inflation: Its Causes and Consequences

I heartily echo this paragraph by Allan:

Part of the problem is that we live in a culture where relationships are understood primarily as transactional and education is often understood by students as exactly that. In exchange for tuition the school issues good grades and a diploma, assuming of course that all the assignments are turned in and class expectations fulfilled. On more than a few occasions I have had emails from students after not receiving an A for the course wondering why they received a B (or less) since they did turn in all the assignments. Apparently, the quality of the work for some is not the determining factor in the final grade; simply turning in the assignments is sufficient.

What is Biblical Womanhood? 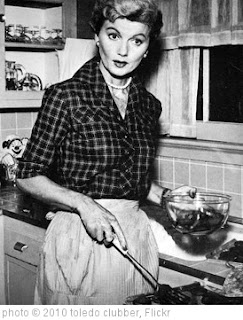 In some circles there is still a lot of talk about the biblical roles for men and women. In reality what the discussion is about is what, according to the Bible, women can and cannot do. Sometimes I think it is the latter that most people are interested in.


I am glad that these kinds of discussions are not a regular part of my experience here at Ashland. I remember when I spent some time at another institution where these kinds of concerns were front and center. I remember feeling like I had been warped back in time. I had forgotten about all of the arguments centering on what the Bible says a woman can and cannot do.


But some of my colleagues in the academy, the church and blogosphere still are encountering these situations, women in particular.


Rachel Held Evans has an interesting post in which describes her experience at a "biblical womanhood" conference. She makes some excellent points especially the one that most men do not want to go back to a full patriarchal society since they don't want to sell their daughters to the highest bidder or forbid women to own property. I think she summarizes the situation pretty well as she explains how one speaker uses a picture of June Cleaver as the model for biblical womanhood.


The first photo to appear in her presentation on biblical womanhood was a photo of June Cleaver.Beginning with June as the model of joyful homemaking and biblical femininity, she traced what she perceived to be the slow deterioration of society through the likes of Mary Tyler Moore, Murphy Brown, Carrie Bradshaw, and, finally, Ellen Degeneres. Women once reveled in their God-ordained roles as mothers and homemakers, she said, before Betty Friedan came along and “ruined it all” by telling women that they could name themselves, name the world, and ultimately name God.. While “feminism is the world’s way. Biblical womanhood is God’s way.”

That image of June Cleaver emblazoned on the screen represented a moment of clarity for me, because it profoundly illustrated a fact that I would encounter again and again and again in my interactions with complementarianism: At its heart, the modern “biblical womanhood movement,” as embodied by the Council on Biblical Manhood and Womanhood and organizations like it, is not really about returning to a biblical lifestyle; it’s about returning to an idealized vision of pre-feminist, 1950s America that relegates a woman’s identity to her roles as wife, mother, and homemaker. Far from being counter-cultural, it is profoundly cultural, in that it emerges as a reaction to feminism and finds its ethos in nostalgic esteem for a specific time in American cultural history.

You can read the whole post here. Do go visit Rachel's blog and let her know you stopped by.
Posted by John Byron at 1:46 PM 1 comment: