Ancient Inscriptions with a Sense of Humor

I have sometimes wondered about this type of scenario in archaeology.

With thanks to James McGrath. 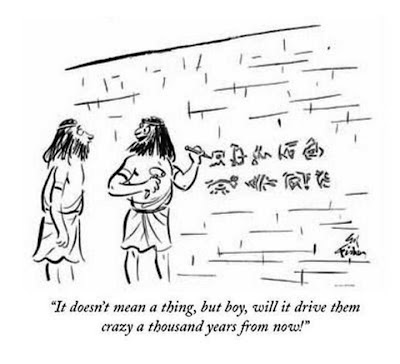 Strange Bible Stories in the News 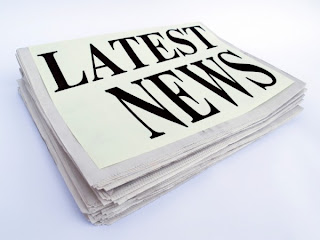 There is not much out there today to write about and I am not feeling particularly inspired. But there are some interesting/strange stories in the news that deal with the Bible.

First off is a new threat to the Gideons' International which distributes Bibles throughout the world. It has become commonplace to open a draw in a hotel room and find a Bible. But that may soon be a thing of the past. The newest threat to the Gideon mission is not from legal challenges or the Antichrist. No, this one is from technology, from Amazon's Kindle to be specific. It seems that the Intercontinental Hotel chain will be placing Kindle Touches in all of the hotel rooms. Beginning in Newcastle, England, the eReader will allow the guest to read the scriptures. Read the article here.

But the change from those thick, heavy paper Bibles to a thin electronic version might not be good for everyone. Pastor Leon Taylor of in Memphis Tennessee is probably glad that one member of his church was using an old fashioned Bible rather than an e-Reader. Taylor was assaulted by a 63 year old member of his church with her Bible. Here is what the report has to say.

"He's got the demon in him," Ina Garrett said.
Ina Garrett, a life-long member of Mount Zion Baptist Church in Selmer, decided to knock that demon out of pastor Leon Taylor.

"One of the older church members came up and struck the pastor with a Bible," McNairy County Sheriff Guy Buck said.

"I hit him in the head," Garrett admitted.

The sheriff arrested 63-year-old Ina Garrett and charged her with assault.


I suspect a Kindle or iPad would have done more injury to Taylor than a traditional print bible. The report doesn't indicate whether it was a hard or soft cover Bible or the translation used. You can read the whole story here.

In another story, the Bible is now being used as punishment. A woman in South Carolina was convicted by a judge of drinking a driving. In addition to passing down an 8 year sentence the judge also ordered her to read the book of Job and write a summary. I am not sure what the connection is between her crime and the book of Job, but it will certainly give her something to do for the next 8 years. Read the story here.

Finally, there seems to be a preoccupation with vampires and zombies these days. And it seems that everyone is rewriting history to include them. I am thinking of the recent book and film, Abraham Lincoln, Vampire Hunter which depicts the 16th president as not only rescues the union from war, but also from vampires. While I have not heard of a version Paul the Vampire Slayer coming out yet, it does seem that zombies are in the Bible. Michael Gilmour has a post today in which he identifies the top ten zombie scenes in the Bible. It's funny how you don't see something in the Bible till it's pointed out to you.

Beer and Faith for the 4th of July 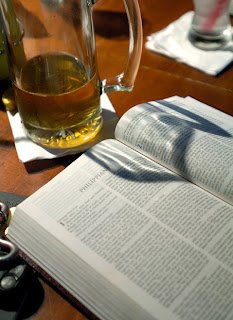 Today is a holiday in the USA, the 4th of July. And many who celebrate this day, myself included, will enjoy a cold beer. As some of you know I am a home brewer and enjoy trying a variety of beers. I just returned from Turkey where I drank Efes, which is the Ephesian beer of modern Turkey.

The monks of the middle ages often relied on their skills as brewers to support their ministry – to this day Trappist beers are some of the most sought after for their complexity and uniqueness – and the Reformers likewise celebrated beer, with both Calvin and Luther speaking well of it, indulging often (though in moderation), and even requiring part of their salaries to be paid in barrels of beer.

And it wasn’t just the theologians who celebrated the connection between faith and beer, brewers were often in the employ of the church (directly or indirectly), and they spoke of their task in the language of faith. Yeast for example, the role of which was not fully understood, could be taken from off the top of one new batch of beer and used in the next – the discovery of this miracle led brewers to term the substance “God-is-good”.

I share this little lesson in history – and there is far more to tell than the space I have will allow – because this connection was something I entirely missed growing up in the Church. In the circles in which I was raised beer was looked on with suspicion, people who were known to indulge were assumed to be backsliding or “carnal Christians,” and it was generally agreed that if you were serious about your faith you would of course not be drinking.


Part of me understands that impulse, the abuse of alcohol has ruined many lives and torn apart many families. But the fact that beer can be used wrongly does not mean it cannot be used to honor God as well. As Luther once said “Men can go wrong with wine and women. Shall we then prohibit and abolish women?”

Beer can be abused, but it can also be a cherished blessing. I cherish beer because beer connects us to the harvest and the land, to each other in all our little communities, and to our history as a people and a Church.

Samson and the Foxes 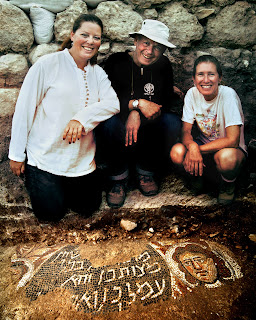 Many know the story of Samson. We are familiar with his superhuman strength, his long hair which somehow controlled that strength, and his wickedly beautiful and cunning girlfriend Delilah who ends up getting his secret out of him.


One part that many forget is the story of Samson getting even with the Philistines for giving his new wife to another man. Apparently Samson liked to tell riddles. But when his new bride's fellow Philistine's couldn't guess the answer to one of his riddles they threatened to kill her and her family. She got the answer from Samson and told the Philistines. Samson got mad and left. When he finally decided he wanted to go back to his wife she had already been given to someone else. To get even with the Philistines Samson is said to have captured 300 foxes, tied their tails together with a torch, and let them go in the wheat fields. The Philistines lost their crops.


While this story may be more popular in a child's Sunday school class it apparently was popular enough in the fifth century to include it in a synagogue mosaic. The Israeli Antiquities Authority is reporting that archaeologist Jodi Magness  and her team have discovered a monumental synagogue with a number of impressive mosaics, one of which includes a depiction of Samson and the foxes. Here is the report.

Huqoq is an ancient Jewish village located approximately two to three miles west of Capernaum and Migdal (Magdala). This second season of excavations has revealed portions of a stunning mosaic floor decorating the interior of the synagogue building. The mosaic, which is made of tiny colored stone cubes of the highest quality, includes a scene depicting Samson placing torches between the tails of foxes (as related in the book of Judges 15). In another part of the mosaic, two human (apparently female) faces flank a circular medallion with a Hebrew inscription that refers to rewards for those who perform good deeds.

"This discovery is significant because only a small number of ancient (Late Roman) synagogue buildings are decorated with mosaics showing biblical scenes, and only two others have scenes with Samson (one is at another site just a couple of miles from Huqoq)," said Magness, the Kenan Distinguished Professor in the department of religious studies in UNC's College of Arts and Sciences. "Our mosaics are also important because of their high artistic quality and the tiny size of the mosaic cubes. This, together with the monumental size of the stones used to construct the synagogue's walls, suggest a high level of prosperity in this village, as the building clearly was very costly."

You can read the full report here. The pictures of Samson have not yet been released and I will post them as soon as I have access.
Posted by John Byron at 12:00 AM 2 comments: 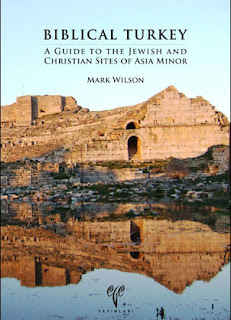 As you know, I have been in Turkey the last two weeks visiting various sites. My wife and I spent 14 days touring the country and were able to see a number of biblical, early Christian, Islamic and modern sites. Some of the places we visited included four of the seven cities from Revelation (Pergamum, Sardis, Ephesus, Laodicea) as well as the region that was known as Galatia and Cappadocia. Many of the sites we visited somehow played an important part in Christian history.


I have been to Israel many times. We visited Greece in 2007, but this was our first venture into Turkey (we visited  Ephesus for 2 hours in 2007, but that hardly counts). I commented to Lori at one point in the trip that while Judea and Palestine is where Christianity was born, Turkey is where it was raised and matured. In addition to the numerous cities that appear in the book of Acts and Paul's letters there is also the rich history that includes important events like the council of Nicea, for instance.


While we were in Turkey we had  chance to have dinner with the owner of Tutku Tours, Levent Oral. I enjoyed getting to know Levent and look forward to bringing back students in the future. Tutku did an excellent job setting up our tour, provided us with a knowledgeable, helpful guide who was flexible enough to make a last minute addition of Laodicea. I highly recommend Tutku if you are thinking about going to Turkey.


At dinner that night Levent gave me a signed copy of Mark Wilson's Biblical Turkey: A Guide to Jewish and Christian Sites of Asia Minor (Ege Yayinlari ,2010). This is an excellent resource that I used both before and during the trip. Mark Wilson has lived and guided in Turkey for more than a decade and is also a fine New Testament scholar. I have known Mark for almost 20 years and highly recommend his book. He combines important historical, archaeological and biblical information in an easy to use guide. I believe that Mark's guide will become for Turkey what Jerome Murph- O'connor's guide has been for Israel.


Therefore, today's giveaway is sponsored by Tutku Tours and I am giving away a signed copy of Mark's book. Normally my book giveaways only last a couple of days. This time, however, I am going to allow it to run for a week. That means that I will choose a winner by 9:00 am (EST) on Monday, July 2nd. If you want to enter for a chance to win this copy of Mark Wilson's fine book put your name below and check back next Monday to see if you won. Also, why not take a moment an visit our sponsor Tutku Tours and perhaps plan a trip in the future.
Posted by John Byron at 12:00 AM 24 comments: