Did Jesus believe he was divine?

Yesterday I posted the debate on the resurrection of Jesus between Michael Licona and Dale Martin. Today I am posting the second debate which focuses on whether or not Jesus thought he was divine.

The video is 2 hours long. Michael Licona and Dale Martin each speak for about 30 minutes followed by a 30 minute round table discussion and then 15 minutes of questions from the audience.

Spoiler alert, Craig Evans only makes a 5 minute cameo appearance at the end. The YouTube screen shot here is a bit misleading if you are hoping to see an extended conversation between the three.

Did Jesus raise from the dead? Michael Licona and Dale Martin Debate

Recently there was a debate held at Saint Mary's University in Nova Scotia on the topic of the resurrection of Jesus. On the side arguing for the historical veracity of the resurrection is Michael Licona from Houston Baptist Seminary who is an evangelical apologist. On the other side is Dale Martin from Yale University who is a New Testament scholar.

It is an interesting debate, but I think you will find that both of these gentleman are coming at the topic from very different perspectives and are talking past each other.

The first hour consists of each giving a 30 minute presentation followed by a 30 minute discussion and then 15 minutes of questions from the audience. 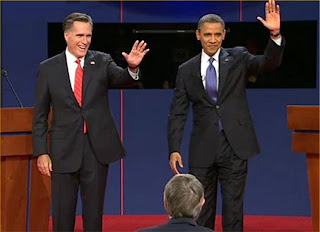 I continue with my series on the Thessalonian correspondence. Today I look at 1 Thessalonians 2:17-18.  I suppose I should call the series “Tuesdays with Thessalonians.”

But, brothers and sisters, when we were orphaned by being separated from you for a short time (in person, not in thought), out of our intense longing we made every effort to see you. 18 For we wanted to come to you—certainly I, Paul, did, again and again—but Satan blocked our way.

Paul’s list of excuses for not returning to Thessalonica is a short one. He blames the devil. Some may think this sounds a bit too much like the excuse used by comedian Flip Wilson (“the devil made me do it”). But for Paul it is not merely an excuse, it is something that deeply troubles him. He is afraid that the tempter (i.e. Satan) might have come and undone everything he and the other apostles had accomplished (3:5). It was that fear the ultimately convinced him to send Timothy back.

There are some who look at Paul’s reference to the devil as an antiquated worldview. They don’t believe in the existence of Satan and consequently do not interpret some events in the world or evil actions by human beings as influenced by Satan. On the other hand, there are those who attribute just about every bad thing that happens to them as demonic interference. This is the very thing that C.S. Lewis tried to warn people about in Screwtape Letters. On the one hand there will be those who deride belief in evil beings and those who believe in them. On the other, there is an excessive interest in the demonic to the point that it begins to place Satan on par with God. Both really lead in the wrong direction. Paul’s comment about Satan here is only a passing one and doesn’t provide us with an explanation of the nature of evil. But it does highlight for us the importance of a proper theological framework for understanding evil. The problem with the above two approaches is that they tend to ignore evil.

Those who don’t believe in a devil or evil as a power tend to blame everything on social ills that have conditioned people to act the way they do. This approach tends to think that if we can “fix” society’s ills we will solve the problem and eradicate what is wrong with us. But this has consequences for our understanding of God. The Bible teaches us that God has enemies (1 Cor 15:25) and that the final enemy to be defeated is not Satan, but death (1 Cor 15:26). Evil is a reality and just when we think we have it figured out or under control it will kill us. I once heard a man asked if he “believed in a devil.” He said “No, but I do believe in evil.” His reply struck me because if history has taught us anything, it is that human beings are capable of committing all sorts of evil. With that in mind, we would be imprudent to either ignore evil or think we can control it.

On the other hand, those who blame everything on the devil tend to have an unhealthy self-confidence in their ability to detect and control the power of evil. The problem with naming evil or the sources of evil, as I once heard N.T. Wright explain, is that it might lead us to think that once we have defined the “them” of evil we now only need to “keep watch” to avoid any problems. But evil (either Satanic or human) doesn’t work that way and can’t be controlled that way. Evil has a way of raising its ugly head in the least expected place at the most unlikely of times. As Beverly Gaventa notes, when we acknowledge the presence of evil in the world we acknowledge our own limits and our own creatureliness (p. 120). This is exactly why Paul reacts that way he does in this passage because he recognizes that he is not in control of the situation and he is aware of the ability of evil to seep in to those places we would least expect it.

Paul doesn’t explain why Satan could hinder him and not Timothy from returning, but it does highlight an important element here. Although we are not in control we are also not powerless. We don’t simply have to sit there and take it. There are things that we can do, no matter how little, that will help to stunt the growth of evil if not make it evaporate altogether. While few will find themselves thrust into difficult situations like that of Bonhoeffer challenging the Nazi regime, most of us can be active in resisting evil in our own communities. I am thinking, for instance, of such evils that are perpetuated like that of the sex industry and its exploitation of people (especially women and children) in pornography and the sex slave trade. We can actively resist and work to rescue those who are being oppressed by it. When looking at the magnitude of the evil perpetrated by something like the sex trade or other evils it can be discouraging as we realize that we may never fully change it. But we must also keep in mind those in the past who also stood up and challenged other similar evils like the practice of slavery and were ultimately successful. Only God can eradicate evil, but in the mean time we are called to resist it and to help those we see being oppressed by evil and its effects (Isa 1:17; Matt 25:36; James 1:27).

Paul wrote to the Thessalonian church during the “in-between” times of Jesus’ resurrection and return and we find ourselves in the same place. We are living with the knowledge of Jesus’ victory, but we are also waiting for the return. In the mean time, we live in a world where evil is still very present and sometimes hinders us, our family and those we minister to. And although we acknowledge its presence, we also resist it.
Posted by John Byron at 8:43 AM 1 comment:

Forgiveness: Some Thoughts from Pete Enns 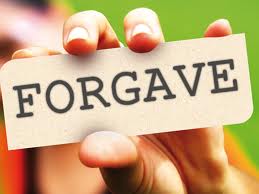 Over at Rethinking Biblical Christianity Pete Enns has some stimulating thoughts on forgiveness. He talks about not just the need for forgiveness, but what it requires of us and does to us as well as what God requires of us in the process.

Here is a bit of what he has to say. I thought the last paragraph was particularly insightful:


Forgiveness does not mean that we make believe the injustice never happened, or make light of it. It does not mean we leave ourselves open to abuse. It means we cease harboring ill against the other. We let it go.

Forgiveness is not for the weak, for it means letting go of our need for justice. It is easier to forgive if we feel some guarantee that justice will be delivered in the near future. But that is not forgiveness.

Forgiveness looks only within, what we can do. It does not think of what should be done to the other.

When we focus on the injustice that has been done, it will become the dominant thought, and so we might be tempted to be God’s instrument of justice, to help things along. That makes forgiveness impossible.

If we call upon God to bring justice, he will begin with us, not with the other. So, we should not call down justice upon the other. The role we have been given is to forgive. Justice is what God will do, mercifully.

Please stop by his blog and read the entire post here. Good reading if you have had a rough weekend. :)
Posted by John Byron at 8:59 AM No comments: 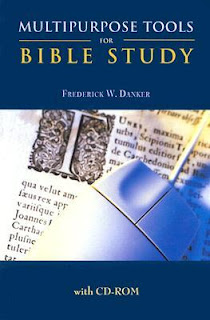 Congrats to Tine Hunt! She is the winner of this week's giveaway. Tina has won Fred Danker'sMultipurpose Tools for Bible Study with CD-Rom (Fortress Press, 2003)


Tina, send your details to jbyron@ashland.edu and I will get the book to you.
Posted by John Byron at 10:31 AM No comments: