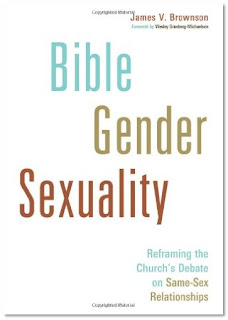 Sexuality and the Bible is a topic confronting the church in ways like never before. Books are being written, debates are taking place, denominations are splitting and high profile figures are taking stands on what they believe the Bible has to say. At times it is difficult to think clearly about the topic because many on both sides are shouting at one another rather than talking together.

With the atmosphere the way it is one would wonder why we need another voice, much less a book, to weigh in on the topic. But it is because of this toxic atmosphere that James V. Brownson has written this book. He has read and listened to what both sides have to say and concluded that both are lacking in the answers they provide. The book is also personal. Brownson talks early on about his own struggle with the topic when he son told him and his wife that he is gay. The impact of that day is what sent Brownson back to look once again at what the Bible might have to say about homosexuality.

The book is broken into four parts and there is much that could be said. It will be very difficult for me to cover everything he says, but I will attempt to give a cursory summary of what Brownson lays out in each section.

In part one he examines the arguments of what he refers to as “traditionalists” and “revisionists.” After looking at the traditionalist arguments against same-sex relationships he concludes that the foundational element of their objections is “gender complementarity,” the idea that anatomical and biological differences between males and females are overcome when the two genders come together and constitute a binary, original human. This conclusion is predicated on an understanding of the “one flesh statement” in Gen 2:24. But Brownson argues that the “one flesh” statement in Genesis 2:24 is not referring to anatomy and biology, but a kinship bond. By joining together they create a new kinship bond that represents the image of God in creation (pp. 32-34). If Brownson is correct, than Gen 2:24 cannot be viewed as teaching “gender complementarity” as normative.

On the revisionist side, Brownson notes that many point out that what the Bible says about same-sex attraction cannot be applied to the contemporary world. Since the Bible has nothing to say about long term committed same-sex relationships, it should not be applied today (p.41). The Bible’s call for justice and love is held up by the revisionists as a template for how same-sex couples should be treated today. But, Brownson questions, if the Bible has nothing to say to same-sex couples how then do we build a distinctively Christian approach to such unions (P. 45)? Instead, Brownson argues, we need a wider canonical examination of biblical discussions on sexuality to determine what relevance they may have for modern same-sex relationships.

In part two he looks at how Patriarchy, “one flesh,” procreation and celibacy are in the New Testament.

Brownson notes that there is a tension in the New Testament between patriarchy and egalitarianism that is resolved in the eschatological vision of the future. The invitation of the future invites people to live now as if they are in the future. Brownson suggests that since the hierarchy of the genders is undermined by the eschaton, so too assumptions about same-sex relationships based on gender complementarity can/should also not be maintained (p.84).

In looking at how the New Testament writers understand the “One Flesh” phrase in Genesis, he argues that even in the New Testament Jesus, Paul and others are not referring to gender complementarity, but to kinship bonds. He concedes that in the Bible the “one flesh” bond only takes place between a man and a woman, but he also argues that there is nothing inherent in the Bible that would prohibit that same type of kinship bond being formed between gays and lesbians (pp. 104-108). Just because this is what is normal to the Bible doesn't mean that it is normative in a different cultural setting (p. 109).

On the topic of procreation, a common argument used against same-sex relationships, Brownson argues that although procreation always assumes marriage, marriage doesn't necessarily assume procreation. He demonstrates that there are a number of instances in the Bible where lack of children doesn't dissolve marriage. Therefore, the inability to procreate doesn't undermine the marriage kinship bond (p.126) and should not undermine same-sex couples to marry.

Finally, he examines notions of celibacy in the Bible since it is sometimes argued by some traditionalists that gay and lesbian Christians should remain celibate. But Brownson argues that celibacy is held up as either a gift that few are given or as something that was part of a temporary abstention from sex.  Thus he wonders if it is ethical to force gays and lesbians to remain celibate if they do not have this gift from God (p. 146).

In part three Brownson focuses on what Paul has to say in Rom 1:24-27, a passage often held up by traditionalists. He suggests that Paul is not talking about any kind of sexuality, but the kind in which an unhealthy preoccupation with lust and desire manifests itself in destructive ways. The problem is not the type of sex, but what drives it (167-169). He argues that the Bible is categorically against this type of lust, but does not necessarily condemn same-sex couples any more than heterosexual ones. He further argues that when Paul speaks of “nature” he is not referring to biology or anatomy, but “what comes natural.” Paul’s understanding of same-sex relationships was that they were driven by an insatiable drive for such actions. Since Paul and the ancients had no understanding of sexual orientation, Brownson suggests that 1:24-27 cannot be applied to those couples that are committed to one another in a same-sex relationship. The problem is uncontrollable lust, not necessarily the mode of sex.

Brownson concludes the book by offering a review of his arguments and looking, briefly, at some of the other passages in the Bible that are often used by traditionalists. He concludes that many of these passages have not been properly understood and that while they are condemning certain behaviors, none of them reflect the type of committed, long-term same-sex relationships that we are witnessing today. In most cases, he argues, the problem is with how one individual is using and abusing another for their own sexual gratification. In the bible, notions of mutual respect and love are not understood to be a part of these relationships. Sexuality in the Bible is hedged by warnings against self-gratification, excess, and shaming and/or degrading others. This vision of redeemed sexuality, Brownson notes, can be applied to committed same-sex relationships as well.

As I mentioned above, there is a lot to this book and it is impossible to address everything that Brownson has said. Overall I think he is to be commended for trying to bring an approach that looks at the Bible with fresh eyes. Rather than apply the Bible from the traditionalist position, he has tried to ask how this ancient document needs to be interpreted in a modern setting that is not envisioned by the authors of the Bible. Rather than suggest that the Bible has little to say to modern, committed, same-sex couples he attempts to apply the sexual ethics of the Bible to them in the same way he would a heterosexual couple.

If there is one thing that sticks out to me about this book it is the emphasis that the “one-flesh” bond is not about gender complementarity, but kinship bonds. Based on his reading of the Hebrew Bible I think he is correct in the context of Genesis. There are times, however, when I am not sure that it works in the New Testament since those authors often read those text in very different ways. The use of Gen 2: 24 in 1 Cor 6:16 in the prohibition against prostitution, for instance, seem to envision more than a kinship bond. And the quotation of Gen 2:24 by Jesus does seem to assume male and female.

But this gets to the very point of Brownson’s book.  The extant evidence from the ancient world doesn't indicate they envisioned same-sex relationships as deriving from orientation. Unlike today, the notion of stable relationships formed in love and mutual respect was not part of their worldview.  Brownson acknowledges that and attempts to tease out a distinctively Christian approach to such unions.

I suspect there will be much debate surrounding this book. Certainly not everyone is going to agree with him (from both camps). But I also think it will help some to rethink how the Bible does and does not speak to same sex relationships. Hopefully it will help to change the atmosphere of the debate.

Overall, I think he makes some good points and while there are areas that I think he could have done a better job, I think he helps move the conversation in the right direction. No matter which side of the debate one takes, Brownson helps bring some sanity to the way we think and talk about it.

Many thanks to the kind people at Eerdmans for sending me a copy to review here.
Posted by John Byron at 3:17 PM