The Genesis Death Sandwich!? A literary device revealed by a computer.

"Intercalation" is among the words I teach my students when studying the Gospel of Mark. This is when Mark begins one story, interrupts it to tell another, and then comebacks to finish the other.

A perfect example of this is found in Mark 5 and the story of Jairus' daughter. Jairus comes to Jesus and requests that he hurry home with him to heal his dying daughter. Jesus agrees. But on the trip to Jairus' home he is distracted by the woman with the issue of blood who gets healed by touching Jesus' garment. In the mean time poor Jairus is waiting for Jesus to finish the trip to his home. But before that can happen a servant from Jairus' house comes to declare that the little girl has now died. Mark then finishes the story of Jairus with an even more dramatic conclusion. Rather than simply healing the sick girl Jesus raises her from the dead.

Mark uses this literary style many times. Sometimes on a medium scale like here, sometimes smaller as in Mark 3 and the Beelzebub controversy and on a larger scale as when he finishes the story of John the Baptist in chapter 6.

But since "intercalation" is not an everyday, household word, my students and many scholars refer to this literary style as the "Markan Sandwich." Mark starts a story (bread) inserts another story (meat or cheese?) and then finishes the first story (bread).

Of course this literary device is not limited to the Gospel of Mark. Biblical scholars have long recognized that this is used by a variety of  authors.

For their study, Rugg and his colleagues ran the King James version of the text through software known as the Search Visualizer, which plotted mentions of life in red and death in green on a single gridded page representing the whole book. Their results showed frequent mentions of life in the opening and closing verses of Genesis, while themes of death were clustered in the middle. They say the device is an example of a literary convention known as inclusio, also called bracketing, where one theme frames another.

Rugg acknowledged that it is uncertain whether or not this "death sandwich" convention was applied to the text intentionally. Nonetheless, he says it might have been used to cushion the negative messages of death, or perhaps to put life and death in stark contrast
"Whether it was a deliberate use of inclusio or a subconscious use is an open question," Rugg wrote. "We don't think that this structure is likely to be a coincidence, given the number of times the two words occur within Genesis, and given that these are themes that have long been recognized as significant within it."

I am not sure that we needed a computer to tell us about this literary motif, but it is interesting to see it plotted out this way. Even more refreshing is that in spite of the sensational title given to the article by Yahoo News, the scientist are acting more responsible with their findings. You can also read about the study at BBC News and see a picture of the computer readout.
Posted by John Byron at 9:24 AM 1 comment:

Is doubt healthy for your faith?

I have commented from time to time on this blog about the role of doubt in conversation with our faith. With that in mind I am posting two recent posts on the topic.

The first is from Zack Hunt and his The American Jesus Blog. Zack wishes out loud that he didn't have faith. Here is a bit of what he says.

Tragically, doubt is an unwanted guest in much of the church today, particularly amongst those who call ourselves evangelicals. In the face of historical criticism, scientific breakthroughs, and the arrogance of fundamentalism, we are left thinking that doubt is the opposite of faith. Doubt, we are told, is the weapon of the enemy. If we allow it gain even a toehold, then the enemy wins and the Christian faith itself will come crashing down.


What we need instead it faith.But faith is not a vaccination against doubt.It is the embracing of it.


Faith embraces our deepest doubts, faces them head on, and chooses to believe anyway. We have faith because we doubt. If we didn't doubt, we wouldn't have faith. We would have knowledge.

But until Christ returns that sort of knowledge alludes us, no matter how arrogantly we may try to claim otherwise. Which means until that glorious appearing we must not only lean on faith, we must also make room for our doubts.

The second is a video interview with Tom Thatcher at Northeast Church in which Tom talks about why doubt is a natural, healthy and needed part of our faith journey.

Is it OK to doubt the Bible? from Northeast Christian Church on Vimeo.

HT: James McGrath
Posted by John Byron at 8:38 AM 1 comment:

Herod the Great in the news 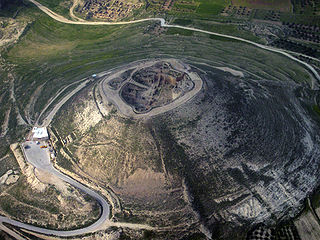 The Israel Museum recently opened an exhibition dedicated to the life and building activity of Herod the Great. The exhibit is the last piece of the career of Ehud Netzer who spent his life excavating the places Herod built and looking for the place where Herod was buried.

For quite a while no one was sure where Herod was buried. Josephus records that he was buried at his Judean palace known as the Herodium, but no one was able to locate it. It took Netzer 35 years to finally locate and identify the tomb, but in May 2007 he announced that he had finally found it. Ironically, the location of Herod's tomb was the very place where Netzer would meet his own fate. In 2010 while helping the Israel Museum to decide what pieces should be taken for the display, Netzer plunged 20 feet into the ancient viewing area of Herod's tomb when a wooden railing he was leaning against gave way. Netzer died of his injuries three days later.

In celebration of the exhibition's opening, several articles are available online.

Biblical Archaeology Review has an article on Herod's burial and Netzer's search for the tomb.

The New York Times also has a short piece.

And the BBC reports on the politics involved with Israel's removing artifacts from Palestinian territory.

Artuz Sheva has recently posted a video of the exhibition.