Leviticus the Game: A New App for Your Phone. 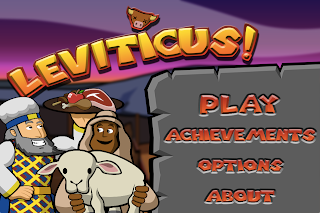 For readers of the Bible the book of Leviticus is one those books many claim to have read, but never have. Let's be honest, trying to wade through all the legal prescriptions for the kinds of sacrifices to have when, the type of food to eat and how to cook it, what to plant, and who to have sex with and when is not exactly bracing reading. Much of it is archaic and not the the type of material that one turns to for inspiration in their devotional life.

But a new App may help change it all. A gamer recently introduced Leviticus: the Game. Here is what the article in Tablet Magazine has to say:

As the game begins, cartoon animals go flying in the air, and players must slash their throats by swiping a finger across the screen. Like many similar video games designed for the iPhone and the iPad—most notably the ubiquitous Fruit Ninja—this new game, too, is fast, fun, and unremitting: one misguided touch and it’s all over. But play for a moment or two, and you realize that the game’s rules—blemished animals must be spared, doves must be sacrificed by the pair—were set in place by the grandest designer of them all: The game you’re playing is based on the Bible’s most intricately detailed book.

Titled Leviticus!, the game, as its title suggests, is both irreverent and deeply faithful to the source text—all that business about doves and cows and purity is right there in the book. But whereas Leviticus is too thick with rules to make for a very compelling read, it’s perfect when played. 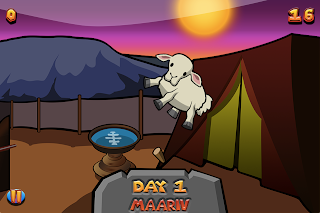 You can read the full story here. As Jim Davila notes, you can't make this stuff up.

Posted by John Byron at 9:17 AM No comments:

A Cautionary Tale about Tattoos in Other Languages.

I don't have a tattoo for two reasons. First, I don't like pain. Second, if I ever had a tattoo it would be of a ship. But I fear that as I get older the ship would appear to be sinking.

But for many younger (and not so young) Christians, the taboo of the tattoo has faded. And people are permanently painting their body with everything from crosses to Bible verses. And I have seen some people with some permanent mistakes.

I once saw a tattoo written in Hebrew on the back of a young girl's neck. Two things struck me about the tattoo. First, that must have hurt! Second, it didn't make any sense. I then learned that whoever had drawn the tattoo had misspelled the Hebrew words which meant she no longer was marked by her favorite Bible verse but a bunch of gibberish.

From time to time a student will contact me asking how to spell a word in Hebrew or Greek or to write out a verse for them in one of those languages for a tattoo they are hoping to have done. And there are times I am tempted to give them something other than what they asked for. Once when a young lady asked me to write out in Greek “Jesus Wept” I was tempted to write “And Judas went out and hung himself.” I haven’t done that, yet, but the following story should be noted if you plan on getting a tattoo in a language you don’t read.

Over at the Aramaic blog Steve Caruso has posted a letter to someone who wrote to him. Steve creates various designs incorporating Aramaic. Apparently someone saw of one of his designs online and had it made into a tattoo. The problem, however, is the now “inked” individual used one of Steve’s samples instead of buying the design from him. Apparently Steve’s samples contain intentional misspellings in order to prevent his artwork being stolen. It appears that the “inked” individual now has a tattoo that either makes no sense or says something other than what they had hoped. They contacted Steve and he has posted a reply letter online. But he has also read the letter out loud. Here is the link where you can read the letter and here is the link where you can hear the letter.

And to those of you who are considering a tattoo in another language, I suggest you make double and triple sure it says what you think it says.

In the mail: Two new titles from Baker Academic

I am very pleased to receive two books in the mail from the kind folks at Baker Academic.

The first is Patrick Gray's Opening the Letters of Paul: A Reader's Guide to Genre and Interpretation (2012). Here is the blurb.

It is sometimes easy to forget that the books of the Bible are not really "books" at all but individual documents composed in a wide array of literary genres. This clear, concise, and accessible text on the Pauline Letters orients beginning students to the genre in which Paul writes. The book compares and contrasts Paul's letters with ancient and modern letters, revealing the distinctive conventions, forms, and purposes of Paul's Epistles. It focuses on the literary genre of the letter in ancient Greece and Rome, providing an overview of subjects, strategies, and concerns of immediate relevance for readers who wish to understand Paul in his ancient context. Discussion questions and sidebars are included.


The second is Donald Hagner's  The New Testament: A Historical and Theological Introduction (2012). You may remember that I posted some video interviews with Hagner about his work here. This the blurb:

This capstone work from widely respected senior evangelical scholar Donald Hagner offers a substantial introduction to the New Testament. Hagner deals with the New Testament both historically and theologically, employing the framework of salvation history. He treats the New Testament as a coherent body of texts and stresses the unity of the New Testament without neglecting its variety. Although the volume covers typical questions of introduction, such as author, date, background, and sources, it focuses primarily on understanding the theological content and meaning of the texts, putting students in a position to understand the origins of Christianity and its canonical writings.  Throughout, Hagner delivers balanced conclusions in conversation with classic and current scholarship. The book includes summary tables, diagrams, maps, and extensive bibliographies.

I plan to post reviews of each of these titles in the near future. In the mean time, many thanks to the good people at Baker.
Posted by John Byron at 3:29 PM No comments:

Lost in Translation: A surprising gain in English translations

It's not unusual to have students enter my Greek class with a certain level of anxiety. For many this is their first stab at learning a language since high school and depending on how that went, it may be the first time they actually learn a language. I remember one year I had a student who was so nervous he sat their with a paper bag so as not to hyperventilate. He was only partly joking.

One of the first things I try to do in the course is sell the students on why they should learn the original languages of the Bible. I usually mention that, although we have some excellent English translations, readers are only getting about 80% of what the text says and means. I then spend the beginning of most classes in the term reading from the Greek New Testament with them and showing them what they can learn by knowing Greek.

What I hadn't realized, however, is that not only are readers of English not grasping everything the text has to say, they are also getting a lot more words in the process. Anyone who has done translation work knows that it is not like solving a mystery or connecting the dots. One word in Greek doesn't necessarily equal one word in English. It can sometimes require as many as seven words in English to be translated clearly. This means that our English Bibles are thicker than those in the original languages.

While I have known this for some time, it was not fully conscious of the extent to which it happens until Patrick Schriener brought it to my attention in a blog post titled The Verbosity of English Translations. In the post Patrick is discussing a 2007 article in JETS by Karen Jobes. In the article she demonstrates the degree to which English translations are verbose in comparison to the original Hebrew and Greek. She offers the following chart. 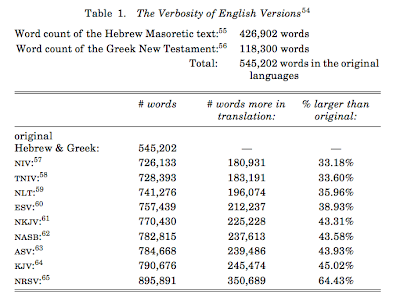 Of course, this can happen in almost any translation project  whether it be into English, French, or the Bargam tribal language in Papua New Guinea. Translation is rarely easy and often messy. But the chart helps to demonstrate that our Bibles are considerably thicker when translated into English. This means that, while we are only getting about 80% of the meaning of the text, it is taking us anywhere from 33% to 65% more to get to that 80%. Of course I am not suggesting that we should eliminate English translations. But I do think this is another example of why knowing Hebrew and Greek is important for those who are in leadership positions in the church.
Posted by John Byron at 8:55 AM 4 comments: 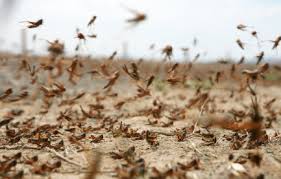 With only 19 days left until the beginning of Passover Jews around the world are getting ready to celebrate and reenact their freedom from slavery at the hand of a God who inflicted ten different plagues on the their Egyptian overlords.

While some think that the story is more legend than fact, nature has recently experienced a sort of repeat performance of the plague of locusts (Ex 10:4). Israel National News reported the following:


As a reminder to those who thought the account related in the Passover Haggadah might have been an exaggeration – think again. Millions of locusts have swooped down in a swarm from the sky on to the land of Egypt.

The locust plague struck over the weekend in the Giza region, home to a cluster of famous pyramids, according to reports in Arab media.

Officials estimated that at least 30 million of the insects have swarmed on to the fields and farms about 15 miles southwest of Cairo. The locust swarm is causing massive damage to agriculture in the area, Alwatan News reported.

In some parts of the Middle East, however, locusts are used for food – and one particular ancient type, known to Yemenite Jews, is actually considered kosher.

Residents were warned not to try to drive away the locusts themselves in order to avoid creating further damage. Instead, “Egyptian armed forces and border guards are attempting to fight the swarm with all means at their disposal,” said Egyptian Agriculture Minister Dr. Salah Abd Al Mamon.


“I ask the families living in the locust-plagues areas not to burn tires,” Mamon appealed. “This does not chase away the locusts, but only causes damage and could ignite large-scale fires that would cost in lives.”

Instead, Mamon noted the weather forecasters have predicted strong winds are soon to come, which he hopes will take the locusts towards the Red Sea, and Saud Arabia. The department also plans to use crop duster planes to address the infestation.

Posted by John Byron at 8:46 AM No comments: