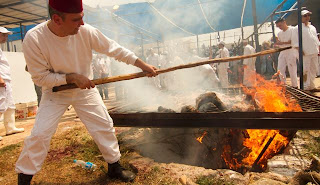 The rest of the article can be found here. It provides a nice historical overview of this group as well as a description of their modern practices.
Posted by John Byron at 8:44 AM No comments:

Don Hagner: the Role of Faith in the Study of Scripture

I am beginning to read Don Hagner's The New Testament: A Historical and Theological Introduction (Baker Academic: 2012). As part of the introduction to the volume Hagner lays out his approach as well as his presuppositions. He openly confesses that he finds the New Testament to be grounded in history as well as the foundation of his faith. Although he is by no means a fundamentalist, Hagner does attempt to read the history of faith with an eye on both what it means "to do history" and to be a believer in and follower of Jesus. In a short section on the role of faith in the study of scripture he says:

"A hermeneutic of trust can have the salutary and paradox effect of making us better historians and scholars of Scripture than those who don't believe." (p.10).

This is a bold statement, but I think Hagner makes an important point here. Too often the hermeneutic of suspicion leads to the conclusion that nothing is trustworthy (and this hermenutic is applied to more than just Scripture). But if we approach the Bible from one of two extremes (either everything is historical or nothing is historical) than we are going to miss the very paradox of Scripture itself. The task of interpreting scripture is not an easy one. We should not approach it with the sole purpose of deconstructing the Christian faith nor should we be afraid of probing it and allowing our presuppositions and our faith to be challenged. As Hagner says a few lines later:

"The believer need have no fear of the [critical] method itself, but need only be on guard against the employment of improper presuppositions." (p. 11)


Thanks to the folks at Baker Academic for sending me this review copy.
Posted by John Byron at 10:53 AM 1 comment: