A Canaanite Inscription in Jerusalem? 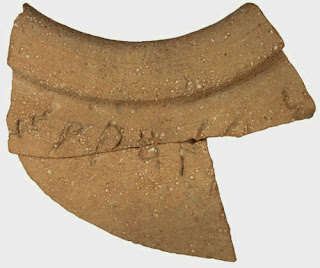 The news is spreading that an inscription on a vessel was discovered in the City of David
excavations. Archaeologist Eilat Mazar announced the discovery this week and has suggested, along with others, that the letters are a Canaanite script. At this point there are no other known examples of this type of script.

It will be interesting to see how this all plays out. At this point there is no reason to doubt the inscription's authenticity. It will be the interpretation of that inscription and what it may mean for understanding the history of Jerusalem that will prove to be interesting. Mazar, using her grandfather's work on King David, suggests that David's scribes were Canaanite which could explain why the inscription is possibly in a Canaanite language rather than Hebrew.

Below is a video of Eilat Mazar discussing the find and below that is the official press release from Hebrew University.


Jerusalem, July 10, 2013 — Working near the Temple Mount in Jerusalem, Hebrew University of Jerusalem archaeologist Dr. Eilat Mazar has unearthed the earliest alphabetical written text ever uncovered in the city.

Hebrew University of Jerusalem archaeologist Dr. Eilat Mazar displays a jar fragment unearthed near Jerusalem’s Temple Mount bearing an inscription in the Canaanite language. Dated to the tenth century BCE, it is the earliest alphabetical written text ever uncovered in the city. (Photo courtesy of Dr. Eilat Mazar; photographed by Oria Tadmor.)
The inscription is engraved on a large pithos, a neckless ceramic jar found with six others at the Ophel excavation site. According to Dr. Mazar, the inscription, in the Canaanite language, is the only one of its kind discovered in Jerusalem and an important addition to the city’s history.


This jar fragment bearing an inscription in the Canaanite language was unearthed near Jerusalem’s Temple Mount by Hebrew University archaeologist Dr. Eilat Mazar. Dated to the tenth century BCE, it is the earliest alphabetical written text ever uncovered in the city. (Photo courtesy of Dr. Eilat Mazar; photographed by Noga Cohen-Aloro.)
Dated to the tenth century BCE, the artifact predates by two hundred and fifty years the earliest known Hebrew inscription from Jerusalem, which is from the period of King Hezekiah at the end of the eighth century BCE.
A third-generation archaeologist working at the Hebrew University’s Institute of Archaeology, Dr. Mazar directs archaeological excavations on the summit of the City of David and at the southern wall of the Temple Mount.
The discovery will be announced in a paper by Dr. Mazar, Prof. Shmuel Ahituv of Ben-Gurion University of the Negev, and Dr. David Ben-Shlomo of the Hebrew University, following their extensive research on the artifact. Prof. Ahituv studied the inscription and Dr. Ben-Shlomo studied the composition of the ceramic materials. The paper, “An Inscribed Pithos From the Ophel,” appears in the Israel Exploration Journal 63/1 (2013).
The inscription was engraved near the edge of the jar before it was fired, and only a fragment of it has been found, along with fragments of six large jars of the same type. The fragments were used to stabilize the earth fill under the second floor of the building they were discovered in, which dates to the Early Iron IIA period (10th century BCE).  An analysis of the jars’ clay composition indicates that they are all of a similar make, and probably originate in the central hill country near Jerusalem.
According to Prof. Ahituv, the inscription is not complete and probably wound around the jar’s shoulder, while the remaining portion is just the end of the inscription and one letter from the beginning. The inscription is engraved in a proto-Canaanite / early Canaanite script of the eleventh-to-tenth centuries BCE, which pre-dates the Israelite rule and the prevalence of Hebrew script.
Reading from left to right, the text contains a combination of letters approximately 2.5 cm tall, which translate to m, q, p, h, n, (possibly) l, and n. Since this combination of letters has no meaning in known west-Semitic languages, the inscription’s meaning is unknown.
The archaeologists suspect the inscription specifies the jar’s contents or the name of its owner. Because the inscription is not in Hebrew, it is likely to have been written by one of the non-Israeli residents of Jerusalem, perhaps Jebusites, who were part of the city population in the time of Kings David and Solomon.
Excavations at the site are conducted in collaboration with the Israel Antiquities Authority, the Israel Nature and Parks Authority, and the East Jerusalem Development Company. The site is in the national park surrounding the walls of Jerusalem’s Old City, near the southern wall of the Temple Mount compound. The Israel Antiquities Authority maintains the excavation site as a national park open to the public.
The excavations are made possible through a generous donation by Daniel Mintz and Meredith Berkman of New York. Participants in the dig include Israeli students and workers, along with students or alumni of Herbert W. Armstrong College sent to Jerusalem from Edmond, Oklahoma to participate in the excavation.
Posted by John Byron at 8:44 AM No comments: