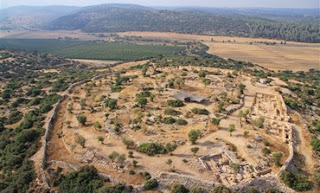 The internet has been alive the last few days with claims that King David's Palace has been discovered (see the Jerusalem Post). Now, with that type of headline many readers are going to associate the discovery with Jerusalem and assume, unless they read the article, that somewhere in the ancient city of Jerusalem archaeologists have finally discovered the home of King David the slayer of Goliath.

The reality, however, is that while the discovery is important, it is not located in Jerusalem and it is not necessarily related to David and it certainly doesn't prove that David killed Goliath.

According to the IAA press release, the discovery was made at a place called Khirbet Qeiyafa.  This city is located 20 miles southwest of Jerusalem in the Shephelah  region which consists of several narrow valleys that served as an important geographical buffer between the Judean mountains, where Jerusalem is located, and the coastal plain where a major highway between Egypt and Assyria/Babylon was located. According to the archaeologists, the foundation stones of what is the largest known building from the tenth century BCE were discovered at this site. Here is some  of what the IAA report says.


Two royal public buildings, the likes of which have not previously been found in the Kingdom of Judah of the tenth century BCE, were uncovered this past year by researchers of the Hebrew University and the Israel Antiquities Authority at Khirbet Qeiyafa – a fortified city in Judah dating to the time of King David and identified with the biblical city of Shaarayim.

One of the buildings is identified by the researchers, Professor Yossi Garfinkel of the Hebrew University and Saar Ganor of the Israel Antiquities Authority, as David’s palace, and the other structure served as an enormous royal storeroom.

Today (Thursday) the excavation, which was conducted over the past seven years, is drawing to a close. According to Professor Yossi Garfinkel and Sa'ar Ganor, “Khirbet Qeiyafa is the best example exposed to date of a fortified city from the time of King David. The southern part of a large palace that extended across an area of c. 1,000 sq m was revealed at the top of the city. The wall enclosing the palace is c. 30 m long and an impressive entrance is fixed it through which one descended to the southern gate of the city, opposite the Valley of Elah. Around the palace’s perimeter were rooms in which various installations were found – evidence of a metal industry, special pottery vessels and fragments of alabaster vessels that were imported from Egypt. The palace is located in the center of the site and controls all of the houses lower than it in the city. From here one has an excellent vantage looking out into the distance, from as far as the Mediterranean Sea in the west to the Hebron Mountains and Jerusalem in the east. This is an ideal location from which to send messages by means of fire signals. Unfortunately, much of this palace was destroyed c. 1,400 years later when a fortified farmhouse was built there in the Byzantine period.”

The palace and storerooms are evidence of state sponsored construction and an administrative organization during King David’s reign. “This is unequivocal evidence of a kingdom’s existence, which knew to establish administrative centers at strategic points”, the archaeologists say. “To date no palaces have been found that can clearly be ascribed to the early tenth century BCE as we can do now. Khirbet Qeiyafa was probably destroyed in one of the battles that were fought against the Philistines circa 980 BCE. The palace that is now being revealed and the fortified city that was uncovered in recent years are another tier in understanding the beginning of the Kingdom of Judah”. 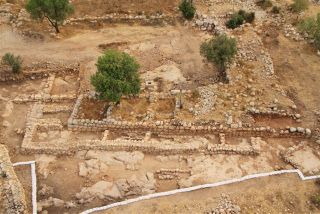 While this is certainly an exciting and important discovery, it is impossible to say that this was David's palace. The last paragraph is probably more accurate with the statements:

The palace and storerooms are evidence of state sponsored construction and an administrative organization during King David’s reign. “This is unequivocal evidence of a kingdom’s existence, which knew to establish administrative centers at strategic points”, .

The presence of large buildings certainly demonstrates some sort of organized government that is making use of its strategic positions. And the dating of the ruins does suggest that the time frame fits nicely with the period in which David and Solomon's reigns are often placed. But without more specific evidence or some graffiti saying "King David was here," we cannot say much more.

See the full IAA press release here.
Posted by John Byron at 8:46 AM No comments: 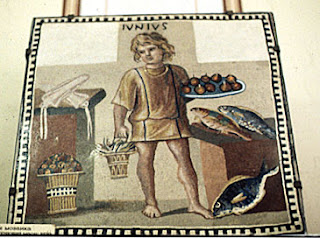 Last year my wife and I went on a tour of Turkey. While we were there we visited the ancient Roman city Aphrodisias where I was first introduced to a former slave named Zoilos. I posted a blog about our visit (here) with some thoughts on the similarities and differences between Zoilos and Onesimus.

Last month I published an article in Biblical Archaeology Review based on that blog post. An edited version is now available on Bible History Daily.

Incidentally, my friend and colleague, Tim Gombis, is beginning a series on Philemon & Onesimus over on his blog Faith Improvised. Tim is going to argue that Philemon and Onesimus were actual brothers. Tim and I have talked about this in private and he knows that I disagree with him. But I look forward to hearing his thoughts afresh now that he has had time to put them in the form of a research paper. Perhaps he will change my mind.
Posted by John Byron at 9:00 PM No comments: