The Passing of Paul W. Meyer

I have just learned that Paul W. Meyer has recently passed away. Mark Goodacre has alerted me to an announcement made by Princeton Theological Seminary.

Word has been received of the death of Dr. Paul William Meyer, the Helen H. P. Manson
Professor of New Testament Literature and Exegesis Emeritus. Professor Meyer, who died at the age of 89 on Monday, July 29, in Chapel Hill, North Carolina, is survived by his wife, Mary Lou, and by two daughters, Katherine and Elizabeth.

The son of missionaries to India, Professor Meyer earned his Th.D. from Union Theological
Seminary, New York, before beginning a teaching career at Yale University Divinity School as
Assistant Professor of New Testament. At Yale, he began a lifelong friendship with J. Louis
Martyn and was a teacher of both Wayne Meeks and Moody Smith. He subsequently became Professor of New Testament Interpretation at Colgate Rochester Divinity School (1964-1970),before joining the faculty of Vanderbilt (1970-1978), followed by Princeton Theological Seminary where he served until his retirement in 1989. He was the Shaffer Lecturer at Yale in 1976. His collected essays, and his masterful, succinct commentary on Paul’s Letter to the Romans, were published in 2004 under the title, The Word in this World, edited by John T. Carroll.
Posted by John Byron at 10:09 PM No comments: 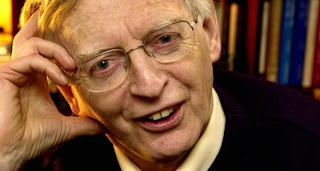 
One of Ireland’s best-loved and most respected theologians, Seán Freyne, has died in Dublin. Director of the Centre for Mediterranean and Near Eastern Studies, Dublin, he was professor of theology (emeritus) in the school of religions and theology at Trinity College.
His academic interests included a study of Galilee in the Hellenistic and Roman periods, the historical Jesus, the gospels, and aspects of early Jewish and early Christian history. He published several books, most recently Jesus a Jewish Galilean: A New Reading of the Jesus Story.
Former president Mary McAleese last night described him as “an absolute gentleman. He was the quintessential Irishman, always asking the probing question”. She said his death was “a huge loss to theology”.
She also said she hoped that, as a devout Mayo man, he had been well enough to enjoy the county’s victory in Croke Park last Sunday.
Dr Freyne lectured widely internationally and was visiting professor of early Christian history and literature at Harvard Divinity School (2007–2008). He lectured at the University of Queensland in Brisbane, Australia.
At one time president of the International Society for the Study of the New Testament, he was also a member of the Royal Irish Academy, a fellow of Trinity College, Dublin, and a trustee of the Chester Beatty Library in Dublin.
A former Catholic priest and native of Tooreen, Co Mayo, he captained the Mayo minor team which won the All-Ireland in 1953, but was not allowed out of Maynooth to play in the final. In 2007 he said: “The GAA is a huge part of my life . . . I have made many great friends through the GAA over the years”.
Survived by his wife Gail and daughters Bridget and Sarah, he will be waked at his home in Rathmines from 6pm. The funeral Mass will be at 11am tomorrow in the Church of Our Lady Refuge of Sinners, Rathmines. Burial will be in Culmore graveyard, Kilkelly, Co Mayo at 5pm tomorrow.
Posted by John Byron at 9:12 PM 1 comment: