Need a scapegoat to help cover your latest "infraction"? There's an App for that. 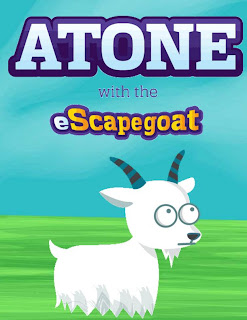 Filed under- "You can't make this stuff up".

We are all familiar with the term "scapegoat." It is often used when a group of powerful people are accused of a crime, but escape the consequence by blaming it on some low level person. The aide or intern working for the senator or congressman is often referred to as the scapegoat, since they are the one who is blamed for the problem, usually without any basis.

Many will not be aware, however, that the term actually comes not form the political arena, but an ancient religious practice. In Leviticus 16:20-22 the goat is part of an elaborate Day of Atonement ceremony whereby the people of Israel receive forgiveness for their sins.

20 “When Aaron has finished making atonement for the Most Holy Place, the tent of meeting and the altar, he shall bring forward the live goat. 21 He is to lay both hands on the head of the live goat and confess over it all the wickedness and rebellion of the Israelites—all their sins—and put them on the goat’s head. He shall send the goat away into the wilderness in the care of someone appointed for the task. 22 The goat will carry on itself all their sins to a remote place; and the man shall release it in the wilderness.

The passage of scripture and the ceremony it describes is among the more oddest one in the Bible.  How a wandering goat removes the sin from the community is not clear, although it is probably more symbolic in nature. We are not certain how often this ceremony was practiced in ancient Israel. While the Day of Atonement is still celebrated by Jews around the world, I am not aware of any that include the ritual of the scapegoat.

But now we can bring back that ritual through the magic of technology. In a recent article The Jewish Week reports that a company has designed an eGoat app that can be used for private confession of sins. Go to eScapegoat.com, select your age range, type in your confession and then hit enter. On Yom Kippur the eGoat will be driven into the wilderness of the internet and your sins will be taken with it.

One wonders what kind of atonement theory this practice reveals?

The Father of a Prophet? A newly discovered inscription has a possible connection to a biblical character. 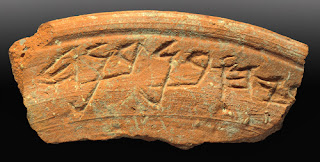 Bible. But a recent find in an excavation in Jerusalem's City of David may be one of those rare finds.

On Sunday the Israel Antiquities Authority announced that a layer of first temple era pottery was discovered including a ceramic bowl with a partial Hebrew inscription. Here is some of what the report says:

Most intriguing is the recent discovery of a ceramic bowl with a partially preserved inscription in ancient Hebrew. While not complete, the inscription presents us with the name of a seventh century BCE figure, which resembles other names known to us from both the Biblical and archaeological record (see examples below) and providing us with a connection to the people living in Jerusalem at the end of the First Temple period.

The first letter of the ceramic bowl’s partially preserved inscription in ancient Hebrew script is broken and is therefore difficult to read, but appears to be the letter ר. The next three letters יהו constitute the theophoric suffix (the component in which the name of the deity appears as part of the first name, such as Yirme-yahu and Eli-yahu, etc). These letters are followed by בנ (the son of) after which appears the patronymic name composed of the three letters בנה. According to archaeologists Uziel and Zanton, “If we consider the possibility that we are dealing with an unvowelized or ‘defective’ spelling of the name בניה (Benaiah), then what we have before us is the name "...ריהו בן בניה"

You can read the full report here.

It will be interesting to see how this story develops. As interesting as this find may be it is important that we keep in mind what it does and doesn't tell us. 1) Keep in mind that the inscription is broken and difficult to read in spots. So while those who read it are making informed decisions, they are still guessing at what the missing part might have said. 2) While the inscription does seems to identify someone at "ryhu the son Benaiah," it is not necessarily connected to the father of Zechariah the prophet mentioned in 2 Chron 20:14.  Yes, this could be the father of that Zechariah, but there is nothing about this shard that definitively connects it with the prophet Zechariah or his father. What the inscribed shard does provide us, however, is a nice touch point with a name from the time period. Not only do we find the name of Benaiah in the Bible, we now also have it on an artifact. At this point there is little more that we can say.

Posted by John Byron at 9:40 AM No comments: