Oral Tradition and the Telephone Game 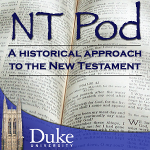 Now, I suspect by coincidence, Mark Goodacre has posted installment 66 of his excellent NT Podcast in which he talks about oral tradition and the telephone game. Mark explains how oral tradition may or may not have worked in relation to the gospel tradition.

If you are new to New Testament studies or a professor looking for resources, I highly recommend Mark's podcasts as a way to teach important concepts in a short, yet informative space of time. You can find all of his podcasts at NT Pod.

Jerusalem: The Center of the Earth

Jerusalem has sometimes been called the center of the world. Some have even referred to it as the navel of the earth. And even if you have never visited the city, it's hard to deny that it is one place in the world that attracts a lot of attention, as it has for more then 3000 years.

If you haven't had the opportunity to visit there in person you will get a chance to tour the city virtually. National Geographic has announced the release of a new film titled "Jerusalem" that will be showing in IMAX theaters across the world. Below is the trailer.


You can search for theater locations nearest you, but I can already see that it won't be playing anywhere near Ashland, Ohio. Perhaps I will need to wait for the DVD. See the Huffington Post for more photos.
Posted by John Byron at 8:49 AM No comments: 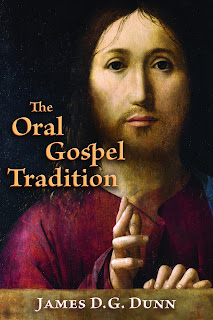 For more than two hundred years New Testament scholars have researched and debated the sources used by the evangelists for what we now know as the four gospels.  In the case of the synoptic gospels (Matthew, Mark, Luke) there is broad consensus that a literary relationship exists. It is generally accepted that Mark wrote first followed by Luke and Matthew who both used Mark and other sources, some common to one another others perhaps independent of one another. While there are numerous variations in the theory, this is the most accepted one.

One question that continues to drive the ongoing study is the degree to which the gospel writers used oral sources. There has been a lot of ink spilled over this topic. For more than a decade Professor James D. G. Dunn has been one of those advocating for a reconsideration of how oral tradition worked and how it may have impacted the authors of the gospels. While Dunn has written about this in various publications (e.g Jesus Remembered) he has not yet published a comprehensive overview of his years of research, until now.

In a new book about to released by Eerdmans on October 3rd, Dunn brings together fifteen different essays that provide an in depth look at the status of oral tradition in gospel studies. Here is a description from the Eerdmans blog.

Imagine the scene. The Christian community to which Matthew was attached receives a copy of the Gospel of Mark.


Is this the first time they have heard of the accounts of Jesus’ exorcisms or of the death of John the Baptist which Mark tells? Is this the first time they have heard Jesus’ Parable of the Sower, or Jesus’ teaching on purity, or the story of Peter’s confession of Jesus as Messiah, or Jesus’ teaching on divorce, or the account of Jesus’ entry into Jerusalem? Some seem to think so. If Matthew’s treatment of these same stories and teachings can be explained in terms of Matthew’s copying and redaction of Mark, then that explanation is regarded as a sufficient and complete explanation of such Matthean accounts.

But is it historically credible that such traditions about Jesus were entirely unknown by the wider range of Christian churches until Mark collected them — from where? Is it credible to assume that such traditions about Jesus had only a very restricted circulation — to the few locations and apostles where Mark found them? Is it credible to assume that Mark was the sole channel through which such traditions passed into wider knowledge? After all, we are talking about forty years after Jesus’ own mission. Was knowledge of the Jesus tradition so minimal and highly restricted throughout that period?

The more obvious scenario is surely that traditions of Jesus’ miracles and teaching circulated quite widely among the groups of believers in Jesus. That when new groups were formed the new believers had already heard traditions about Jesus and were eager to hear more. If this is indeed the case, it is hardly likely that the traditions about Jesus contained in Mark’s Gospel were wholly unknown to Matthew and his community. On the contrary, it is much more likely that they knew many of these stories and teachings, in all likelihood in varying versions. And it is also much more likely that in some cases Matthew preferred the version he knew best when writing his Gospel as an expansion (and perhaps even as an improvement?) of Mark’s.

Many thanks to Eerdmans for sending me a copy ahead of the release date. I look forward to reading it and posting a review here in the near future.
Posted by John Byron at 8:39 AM No comments: