Magic and Curses in Jerusalem 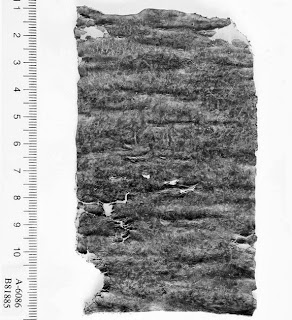 Magic is not a topic most would associate with Jerusalem. But it is more common than you would
think. Although the Bible has some not too pleasant things to say about those who practice magic, archaeology reveals that it was practiced by many (Lev 19:31; 2 Kings 21:6; Isa 8:19). Amulets and incantation bowls are among some of the items sometimes discovered in a dig.

The Israel Antiquities Authorities is reporting the discovery of a lead curse tablet found in the area of the city of David. It is written and Greek and was found in the remains of Roman mansion. Live Science has the story.


A lead curse tablet, dating back around 1,700 years and likely written by a magician, has been discovered in a collapsed Roman mansion in Jerusalem, archaeologists report.

The mansion, which is being excavated by the Israel Antiquities Authority in the Givati Parking Lot, is located in what is known as the "City of David," an area that holds at least 6,000 years of human occupation. The mansion itself covers at least 2,000 square meters (about half an acre) and contains two large open courtyards adjacent to each other. It was in use between the late third century and A.D. 363, when it was destroyed in a series of earthquakes on May 18 or 19.

The text is written in Greek and, in it a woman named Kyrilla invokes the names of six gods to cast a curse on a man named Iennys, apparently over a legal case.

Posted by John Byron at 8:46 AM No comments: