Of God and Beer: How some churches are retaining worshipers 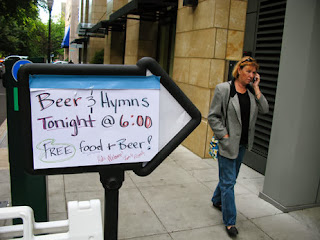 As my regular readers will know, I not only enjoy a good beer I enjoy brewing it as well. I still get strange looks from some who can't figure out how my occupation and hobby interact with one another. The simple answer is, usually not while I am working. I was, at one time, however, a member of group called God and Guinness. We would meet once a week in a pub and . . . well I think the name explains what we did there.

But there are some who are now moving to introduce beer as a regular part of their worship service and evening hymn sings. NPR ran a story recently about how a a few churches are trying to stave off decline by holding services accompanied by craft beers. Here are some excerpts from the story.

With mainline religious congregations dwindling across America, a scattering of churches is trying to attract new members by creating a different sort of Christian community. They are gathering around craft beer.

Some church groups are brewing it themselves, while others are bring the Holy Mysteries to a taproom. The result is not sloshed congregants; rather, it's an exploratory approach to do church differently.

Leah Stanfield stands at a microphone across the room from the beer taps and reads this evening's gospel message. She's a 28-year-old leasing agent who's been coming to Church-in-a-Pub here in Fort Worth, Tex., for a year, and occasionally leads worship. "I find the love, I find the support, I find the non-judgmental eyes when I come here," she says. "And I find friends that love God, love craft beer."

In downtown Portland, Ore., at the stately old First Christian Church, one Saturday night a month they open the parish hall for an event called Beer and Hymns.

There must be 100 people here tonight, most of them young, the kind you rarely see in church on Sunday morning. They're swigging homemade stout from plastic cups — with a two-beer limit. They're singing traditional hymns from a projection screen like Be Thou My Vision. And they're having way too much fun.

Like the crowd at Church-in-a-pub, a lot of folks at Beer & Hymns appear to be refugees from traditional churches.


As much as I love both beer and theology, I do wonder to what end this sort of worship experience will lead. I am not sure if the ultimate reason they are gathering is so that they can focus together on the worship of God and the good news of the gospel or so that they can down a few beers. While meeting people who "love God and craft beer" does appeal to me, I do think, however, the church is about more than finding people who have things in common with us. Certainly that will be the case in many or our worship experiences, but I am not sure that should be what attracts us to one another. Moreover, while I am certainly not one to insist that all worship of God most take place in a church, I do wonder if moving the church into the bar will help attendees focus more on God or their beer.

Proponents of this move call it a transitional experiment. They are waiting to see how this new church model will develop. I am wondering, however, to what degree do the attendees have any connection with the long history of the church. Do they have any sense of the sacred? Or has it been diluted along with the beer they drink while belting out hymns?

Somehow I am not convinced this is a viable long term strategy. Perhaps someday I will have an opportunity to visit such a meeting.

What are you thoughts?

Badass Birds of the Bible 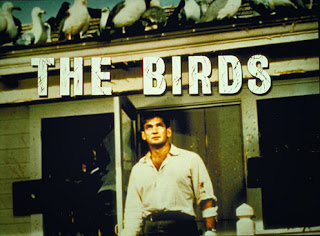 I must admit that this is probably the first time I have used the above descriptor in any of my blogs. But after reading Debbie Blue's article over at the CNN Blog I must admit that there is no better way to describe the birds of the Bible. Birds are at the beginning and the end of the (Christian) Bible, but their roles vary from place to place.

(CNN) – As long as humans have been breathing, they've invested birds with meaning.

They fly all over the Bible - from beginning to end - and they have a prominent place in the founding narratives of almost every culture and religion. They are not just bones and feathers. They are strength or hope, omen and oracle.

In the Bible's first book, Genesis, God hovers over the face of the water like a dove, the Jewish sages suggest in the Talmud. In its final book, birds gorge on the flesh of the defeated "beast" in Book of Revelation.

Birds are the currency of mercy, sacrificed to God in the hopes of winning blessings or forgiveness. They bring bread to the prophets. Abraham has to shoo them away from his offering, and a pigeon accompanies Jesus on his first visit to the temple.

Jesus told us to "consider the birds." I love this about him, and I've taken his advice to heart.

In doing so, I've found paying attention to these wild, awesome animals reveals hidden layers of meaning in the Bible and new lessons for modern Christians looking for grace in unexpected places.

Here are a few of the surprising things I've learned about Bible birds.

Read the full post here.
Posted by John Byron at 9:06 AM No comments: 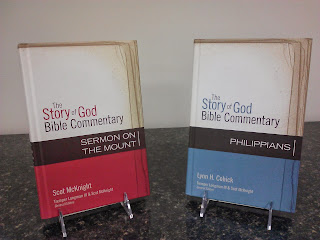 Congratulations to Jordan Messner and Lori Lower! They each one a volume of the new Story of God Commentary series.

Many thanks to everyone who participated. I will be posting more great giveaways in the future and will offer more Story of God Commentaries as they become available.