Commentaries without a Library

Every student needs good resources, but access often depends on having a library. But there are ways to access commentaries on Google Books, if you know how to do it. In the video below Tim Bulkeley of Sansblogue demonstrates how to get the information you need.

Not original therefore not inspired? The story of the woman taken in adultery. 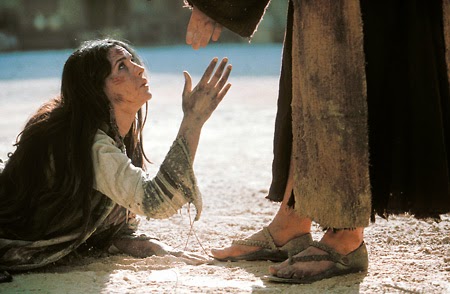 One thing that confronts every first year Greek student is the existence of variant readings. These are verses in the New Testament that either don't appear in our earliest manuscripts or, if they do, read somewhat differently.

Many readers of English Bibles have probably noticed a footnote now and then with the statement "this verse doesn't appear in our earliest manuscripts." See John 5:4 and Mark 16:9-20 as two examples.

Probably one of the most famous variants is the passage about the woman caught in adultery (John 7:53-8:11). Although this is one of the best known stories in the Bible, it wasn't originally in John's Gospel till centuries later. No one is exactly certain of its origins, but we are certain that it wasn't part of John. In fact, it even appears in Luke 21 in at least one manuscript.

Nonetheless, although the inclusion of the story is late, most text critics agree that the story seems to be an authentic tradition about Jesus. And thus it remains in John where it's been for centuries and will do so, unless some get their way.

Apparently there are some who want to see the story of adulterous woman confined to a footnote in John's Gospel (see here). But even more interesting is the suggestion by Denny Burk is that the story is not inspired. Here's what he says.

What many people do not know is that the story was not originally a part of John’s gospel. A scribe(s) added the story centuries after John’s Gospel was written for reasons unknown to us, and it is therefore not inspired by the Holy Spirit. The story remains in our English Bibles more for tradition than for anything else.


Burk's comments raise an important question. How old does a tradition about Jesus need to be to be considered inspired? Burk's assumption seems to be that since we don't know where the story about Jesus and the adulterous woman originated we therefore cannot consider it inspired and I assume, therefore, authoritative. In fairness, Burk does say that he thinks it communicates a truth consistent with biblical truth. But does he mean the story of the woman is not "biblical."

While I am not seeking to blow open the New Testament canon, I do think Burk and those like him have an overly narrow view of what is "biblical" and what is inspired. Even if it wasn't written by the author of John and is perhaps very late does this mean it is no longer inspired?

What do you think?  Is it inspired? Should we remove the story?
Posted by John Byron at 9:50 PM 11 comments: