Test results for the "Gospel of Jesus' Wife" 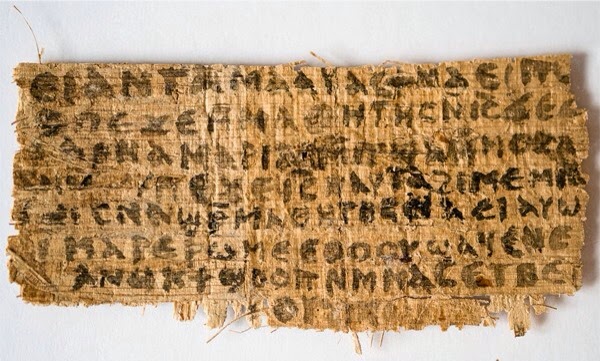 Newspapers and blogs are announcing the long awaited results from the tests performed on the papyrus fragment known as the Gospel of Jesus' Wife (see here for earlier story).

According to Harvard Magazine the tests reveal that both the ink and the papyrus are ancient, perhaps from the eight or ninth century of the common era. While this certainly indicates antiquity, it should also be noted that the carbon 14 dating could not demonstrate that the fragment was from the fourth century, as some were claiming. Here is the relevant section of the article.

Because the fragment is so small, carbon-dating it proved troublesome. Researchers at the University of Arizona called into question their own results—which dated the papyrus to several hundred years before the birth of Christ—because they were unable to complete the cleaning process on the small sample of papyrus with which they were working, and felt that might have led to spurious results. A second carbon-dating analysis undertaken by Clay professor of scientific archaeology Noreen Tuross at Harvard and the Woods Hole Oceanographic Institute dated the papyrus, and a separate one (also believed to be of ancient origin) with text from the Gospel of John to approximately A.D. 700 to 800.

The debate surrounding this fragment is certainly not over. Even if the papyrus and the ink are from 700-800 CE it doesn't mean that this fragment is "authentic." It's possible that it is an ancient forgery. Moreover, even if it is authentic, the fragment is so small and incomplete that it is impossible to conclude that it offers any proof that Jesus was married.

I said before, it's quite possible that the fragment is authentic and represents thoughts about Jesus from someone in antiquity. But this doesn't automatically suggest that Jesus had a wife. When this find was first announced I praised Karen King for the way she presented it to her peers. But the situation quickly deteriorated when  it was also announced that she had already filmed a special segment for the Smithsonian Channel. This was, in my opinion, a bit premature since there had not been adequate time for peer review and subsequent scientific testing. If there is a moral to this story it's that we should be careful how we present our discoveries. While no presentation of research is immune from criticism and potential flaws, allowing time for the community of scholars to weigh in cannot be overstated.

For those with access to Harvard Theological Review, you can read Karen King's long awaited article here.

Christopher Rollston still doubts its authentic and here's why:

As for the laboratory tests, the carbon tests on the papyrus demonstrate that the papyrus is ancient. That’s no surprise. Just as modern forgers of ostraca use ancient pottery sherds for their logia, so also a modern forger of a papyrus inscription would use some ancient papyrus (which, although certainly not as readily available as pottery, is still available….with or without ancient ink). It should be emphasized that papyrus was often reused (note the phenomenon of palimpsests) and so the putative date for the papyrus itself (prior to the Common Era) is not an important issue at all, neither for authenticity, nor against authenticity. It is an absolute non-issue. Also, the fact that the “ink” used on this is consistent with the chemical composition of ancient ink is also not necessarily evidence for antiquity. After all, the chemical composition of ancient “ink” has been known for some time and the chemicals available in antiquity are certainly still available today. Thus, the chemical composition of the ink is not necessarily an argument in favor of authenticity. Also, it is also possible for someone to scrape off (e.g., from a papyrus) ancient ink from the words of some mundane ancient inscription….and then add a little water to the dried ink which had been scrapped off and then resuse the ink. Some people (including some scholars) assume that modern forgers are not all that bright (and thus would not be that clever in forging something). In contrast, I believe that modern forgers (at least from the final quarter of the 20th century and on) are quite sharp…..and for good reason they try to be very clever: after all, there is much money to be made and modern forgers knows this….so, as for this piece, I remain very suspicious of its authenticity. Perhaps it’s ancient….but I doubt it.

Posted by John Byron at 9:28 AM No comments: