I (Still) Believe: Leading Bible Scholars Share Their Stories of Faith and Scholarship 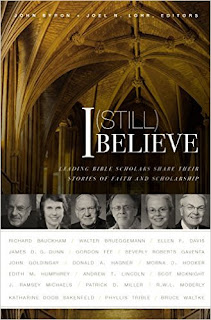 Like many students, our professors made quite an impression on us. Indeed, our lives have been enriched as a result of our time with them—in their writings, in the classroom, at seminars, tutorials, conferences, and so on—and it’s probably safe to say that we became scholars ourselves because of them.

It’s clear that our professors’ lives and faith have touched us. At the same time, we’ve regularly encountered stories in popular books and other media of prominent Bible scholars who have left the faith as a result of their scholarship. These accounts, at times moving and compelling, have reminded us of the tensions in our work, but also that there is more to be told. We know that even while there are those who have journeyed away from their faith, there are many who have not. Indeed, we are personally familiar with a great number of scholars who retained a vibrant, living faith, albeit changed and shaped by their experiences in life and as a scholar. In thinking about this all, we decided to approach some of these people and ask them to tell us their life stories—the stories of their lives as believers and biblical scholars, including the challenges and joys they faced in both areas.

The result is about to be published. It’s a collection of stories titled I (Still) Believe and it will published by Zondervan next month. The contributors make up a diverse group of prominent—indeed some of the world’s most influential and popular—senior Bible scholars, both women and men. All of them explore how faith and biblical scholarship intersect, each in their own way. All of them engage with the ever-important question of how serious study of the Bible affects, whether by threatening or enhancing (or both), one’s faith. More than anything this book affirms that testimony, or "witness" is an integral part of the Christian tradition. Testimony still matters. These unique testimonies, each in their own way, provide a mosaic of faith—beautiful, at times subtle, often sophisticated, wonder-filled statements of faith.

Here is what some have to say about I (Still) Believe:


This is a book that needed to be written, on behalf of all those who live in the pressing, sometimes unbearable tension of a life of scholarly pursuit and personal faith. Through their own diverse stories of faith and life, these stellar biblical scholars show us that their lasting legacy may not be simply their published works, but how they modeled navigating the tension with respect and authenticity, and thus the transformation of their faith rather than loss of it.

This is a very important and salutary book for all who struggle holding the critical study of Scripture and a commitment to the apostolic faith together.  Scholars from a broad spectrum of denominational and institutional affiliations, who have distinguished themselves as "heavy hitters" in biblical studies, share how faith has been a driving force in their scholarship and how their scholarship has been formative for their faith and practice.  This cloud of witnesses, while diverse in so many ways, bears a unified testimony -- biblical scholarship, a living faith, and a commitment to the Church of God can dance hand-in-hand in ever richer and more nuanced steps rather than trip each other up.

The book will be released at the beginning of July and can be pre-ordered now.

Below is a set of promotional videos in which the co-editors John Byron and Joel Lohr share some of their thoughts on the book.